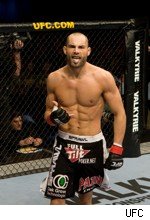 A welterweight fight between Mike Swick and Ben Saunders has been added to the undercard of UFC 99, the June 13 show in Germany that will be headlined by Rich Franklin vs. Wanderlei Silva.

FiveOuncesOfPain.com is reporting that Swick and Saunders, both of whom are coming off very impressive wins at the UFC Fight for the Troops in December, have signed bout agreements to meet at the Lanxess Arena in Cologne, Germany.

Swick, who needed only 33 seconds to TKO Jonathan Goulet in December, is one of the Top 10 welterweights in MMA and should be considered a heavy favorite heading into the fight. But Saunders had his best win yet in December, showing off some devastating Muay Thai skills in beating Brandon Wolff by first-round TKO. Swick is 8-1 in his UFC career and Saunders is 3-0. Both are well known to UFC fans as former Ultimate Fighter cast members.

UFC 99 is shaping up as a fairly typical European card, with plenty of good match-ups but no great ones. Here is the UFC 99 fight card as it stands right now, including some fighters who have been rumored for the card but not officially announced: