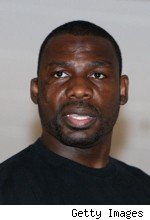 Rahman told FightHype.com that if he fights Kimbo, "I see him getting knocked out quick. ... Kimbo would get knocked out trying to take me to the ground."

And that's the problem I have with Rahman's foray into MMA: The indications, both from what he told FightHype and from what his manager told Sherdog, are that he just wants to beat up cream puffs like Kimbo, Butterbean, Tank Abbott or James Thompson, and that he doesn't realize that if he wants to be a legitimate MMA fighter, he'd need to develop a world of skills that he currently doesn't possess.

I've always been a Rahman fan, and I would love to see him give MMA a real shot. But you get the sense from reading his comments, including "I don't follow MMA," that he has no idea what he'd be getting himself into. If all he's looking to do is beat up Kimbo, he'll do just fine. But if he plans on taking on serious opposition,he's in for a rude awakening.