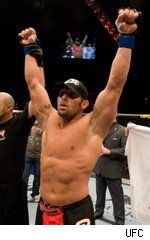 Shane Carwin's MMA career has been perfect: 10 fights, 10 wins. Five wins by submission, five wins by knockout. Not a single opponent has even made it out of the first round against him.

But when Carwin steps into the Octagon at UFC 96 against Gabriel Gonzaga, he'll get a much tougher test than any of his 10 previous opponents have given him. In an interview Wednesday, I asked Carwin about the big step up he's taking in the quality of his opposition, and where he thinks he ranks among the top heavyweights in the UFC. We also talked about his other job, working full-time as an engineer, and how that contrasts with the stereotypes about MMA fighters. The full interview is below.

Michael David Smith: You've dominated all your previous opponents, but Gabriel Gonzaga is a huge step up in competition. Have you changed your training to prepare for him?
Shane Carwin: No, everything is pretty much the same. I'm with the same team. I'm fairly new to this sport so most of the focus is on me, and me learning all the aspects of the game, and not on my opponents.

If you beat Gonzaga, where do you think that puts you in the heavyweight pecking order?
It would put me right there toward the top. That's where Gabe's at right now, he's a top 10 heavyweight in the world. It's a great opportunity for me.

What do you see as Gonzaga's major strengths and weaknesses?
I think Gabe brings it all. He's a complete fighter. The days of being a one-dimensional fighter are long over. People have to be well-rounded, and I think Gabe brings that complete package.

Do you see yourself as a well-rounded fighter? We all know you're a big, strong, athletic guy, but can you call yourself a well-rounded mixed martial artist?
I think I'm getting there. I don't think I've come close to reaching my potential. Athleticism can take you quite a ways, but I'm still learning a lot of techniques, working on my boxing, kickboxing and jiu jitsu. Even in wrestling, MMA wrestling is different from regular wrestling, so I'm working on that as well.

As a college wrestling champion, what did you have to learn to make the transition and take advantage of those wrestling skills in MMA?
I think wrestling teaches your body where to be. It's a great base to have in the sport. But when it comes to MMA wrestling, you're taking somebody down against the cage, or people are throwing combinations at you, or you're catching kicks, different things to enable the takedown. And, of course, learning how to fight a great jiu jitsu guy. You have to learn to fight off your back. There are subtle differences between collegiate wrestling and wrestling for MMA, but it helps to have that base.

I've heard people compare you to Brock Lesnar because you're both big, powerful guys who were successful college wrestlers. Do you see yourself as similar to Brock Lesnar?
We come from a similar background when it comes to wrestling. Our size is pretty similar. I think people see us as similar because of our size and our background. Do I see us as similar? I think Brock's a different character than I am, and that's what makes the sport fun.

What do you think will happen when Lesnar fights Frank Mir?
I don't know. I'll be watching, that's for sure. I'm a fan of the sport and enjoy watching. It should be an interesting fight.

You've dominated all your fights so much that no opponent has ever lasted more than a couple of minutes. Are you confident you can go 15 minutes if you need to?
I'm at 6,000 feet where I train and we go five five-minute rounds, and I feel pretty good at the end of five fives. In fact, I feel like I get stronger in rounds two and three.

What do you work on to get yourself into that kind of cardiovascular shape?
It's a lot of different things. Sparring, going live, those types of sessions are the hardest and those workouts resemble the fight the closest. There are also explosive drills that I do continuously for five minutes.

For a bigger guy like you, is it harder to get yourself into the kind of cardiovascular shape you need to be in to fight for 15 minutes or, if you get a title shot, 25 minutes?
The older I get (34) it seems like it is. When I was wrestling in college it didn't seem to be such a difficult thing. But now five-minute rounds are a long time.

You made your pro debut when you were 30. Do you wish you would have taken up MMA a little earlier?
Oh, I went through college and everything, and I finished that in 2004. It wasn't much longer before I got started fighting, so I wouldn't say I would change anything. Things have worked out pretty well. I think everyone has about 10 years of fighting anyway, because of the brutality of the sport, the physicality, getting hit in the head, your body taking punishment. So you can start at 21, but I think by the time you're 31, you'd be pretty weathered.

Watching Antonio Rodrigo Nogueira recently, he's only 32, but he looks like an old man, like all his fights are catching up to him.
Yeah, when you're sparring three times a week, and taking those kinds of shots competitively, everyone who fights, there's always something that's bothering you or nagging you. That's just the nature of the sport. I think that's why Randy Couture's been able to do it as long as he is, because he got a late start. I was just talking to one of my trainers about it. People really only have 10 or 15 years in this sport before they start showing the signs of age.

I understand you have a degree in mechanical engineering from the Colorado School of Mines and another degree in environmental technology from Western State College?
Yes, and I have a minor in business and economics from the School of Mines, too.

And you still work as an engineer in addition to being a professional fighter?
Yeah, I'm still full-time for the North Weld County Water District. I help develop and work on the hydraulic model, subdivision review, new infrastructure review, stuff like that.

Wow.
Yeah, but every day I get hit in the head. By the time I finish my career there I could be pushing the broom.

With the time it takes to be a pro fighter and a full-time engineer, will you have to quit one or the other eventually?
I'll cross that bridge when I get there. It certainly makes for a full day. You have to have good time management. There's no time for fluff in my day. And I'm also married and I have a wonderful son who's 8 years old.

Being an educated person who's in MMA, does it bother you that in some places MMA is still seen as more like a street fight than a legitimate sport?
Yes, definitely. There are a lot of people out there who are uneducated about the sport. People don't understand the involvement, the practices, the things that go into training to learn boxing, kickboxing, jiu jitsu. People don't understand that it's not what people make it out to be.

With 10 days to go before your biggest fight, what do you have to do between now and fight night?
Continue to train hard until the day of the fight. All next week I'll be in Ohio, and I'll try to relax, enjoy it and have fun. That's why I do this. I love it. It's not something I have to do, it's something I enjoy. I feel very blessed.