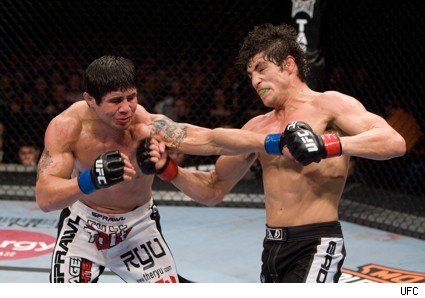 In another data point showing the growing popularity of mixed martial arts, Spike TV said today that its broadcast of UFC 95 was Saturday night's most-watched show on television among young men.

According to Spike, the broadcast drew 634,000 men between the ages of 18 and 34, and 1.244 million men between the ages of 18 and 49. That made it the most-watched show on TV -- broadcast or cable -- for those demographic groups, topping ESPN's broadcst of the Oklahoma-Texas college basketball game. That's very good news for the UFC and for Spike, because young men are the viewers most coveted by advertisers.

It's also very good news for the UFC and Spike because UFC 95 -- despite the absence of big stars -- was an exciting, fast-paced show that featured nine fights in three hours and likely turned quite a few new viewers into UFC fans. The main event of Joe Stevenson vs. Diego Sanchez didn't look like anything special beforehand but turned out to be a good fight that established Sanchez as a top lightweight contender.

For as bad as the economy is right now, it seems that everything the UFC touches -- from pay-per-view to smaller shows on Spike -- turns to gold.