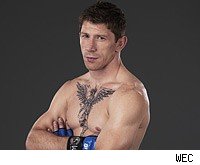 For a long time, the featherweight division in World Extreme Cagefighting was Urijah Faber and everyone else. Then Mike Brown came along.

Before Brown and Faber stepped into the cage in November, Faber had been considered the WEC's best and most popular fighter for so long that it was unthinkable that he wouldn't have a belt around his waist. But it took Brown less than two and a half minutes to take the featherweight belt from Faber, and now it's Brown who will headline a WEC card on Sunday.

I talked to Brown this week about beating Faber, his upcoming title defense against Leonard Garcia and why his training includes plenty of wrestling but no weightlifting. The full interview is below.

Michael David Smith: How has your life changed since you beat Urijah Faber?
Mike Brown: It hasn't changed a lot. I get recognized a little more, and I do more interviews, but that's about it.

Do you consider beating him the biggest accomplishment of your career so far?
Oh, for sure. To win the WEC title, that's the No. 1 spot in the world.

You were a big underdog against Faber. Did that motivate you?
Every fight I'm really motivated to train hard and win, but that actually took the pressure off. When you're an underdog it's easier, you know that you can only do better than what people think you're going to do, so it's an easier fight in that regard.

If you beat Garcia I would guess you'll have to fight Faber again, do you think that's true?
I would assume that the winner of Garcia and I will fight Urijah for the title. That's what I'm guessing the plan is.

Where do you think beating Faber puts you among the world's elite fighters?
Well, he was the No. 1 guy in the weight class, and he was up there in the pound-for-pound rankings. It was a big win. I don't know exactly where it puts me because the rankings are all just somebody's opinion, but he's a very tough guy and it was a nice win to get.

What happened with your rib injury in the Faber fight? Has that limited you at all in training?
It took me about three weeks to heal up. It was just some torn cartilage. I've had that probably three or four times before, in different spots in the ribs. You twist too hard and the cartilage tears.

What kind of fight are you expecting from Leonard Garcia?
He comes out, swings hard and swings wild. He has good jiu jitsu, so he's fairly well rounded. He's a brawler and an exciting fighter. So I expect an exciting fight.

If he swings wildly, do you think that's where you can find an opening?
I think so. I think he'll leave himself open. But he swings wildly because he throws hard. So I have to be careful of a big shot, and he has to look for my big shot. Hopefully mine will land before his.

All of your losses are by submission. Is that your biggest weakness?
I would say it was a weakness for me in the past, but since I've trained at American Top Team, we're probably the best jiu jitsu team in the world. You've got so many great guys here whose jiu jitsu is at a level where all your holes get found quickly and you start to close them up. So I don't think that's a problem anymore.

I know you're at a good gym with American Top Team. I also talked to Leonard and he really raves about the training at Greg Jackson's gym. What makes American Top Team the right fit for you?
They're two of the best gyms in the world. You have so many good guys to train with that you can't help but get better. All you have to do is show up and you're going to get better. I don't have to look too far to find great people to work with. Sometimes at smaller camps it's tough because if a couple guys are out or on vacation, there's no one to train with.

Is there anyone in particular you train with a lot?
My biggest training partner is probably Yves Edwards. He helps me put everything together. He's got a lot of tricks that I've incorporated into my game, and he's always there training. I also have some great coaches. Marcos Da Matta, Wally Mohammad, Ricardo Liborio. We have an excellent coaching staff.

Do you watch a lot of film? Is that a big part of your preparation?
I watch some. I don't get overly caught up with it. I'll watch each one of his fights, the last four or five, I'll watch those once or twice to look for some things, a weakness here, a weakness there. But you also don't want to get too caught up in what he does. I like to put my game on him and not worry about what he does.

There seem to be two schools of thought. Some fighters say you need to carefully plan for your opponent, while others say you should prepare the same way for every fight. It sounds like you're in the middle.
You want to get a general idea of what they do, if the guy is better on his feet or better on the ground, for general strategy. But when you start dealing with pretty well-rounded guys, you've just got to go out and fight your fight. Some guys have a weakness in one area and you can take advantage of it, but when you're fighting someone who's well rounded that's not as important. You also want to find sparring partners who are similar to your opponent, similar style.

You're pretty big for a 145-pounder. Do you see that as an advantage?
I'm really strong for the weight class, that's for sure. But Leonard's a big guy too. He's not small. But I think my strength and power is my best attribute.

I've found that a lot of fighters say they don't lift weights.
I don't think it's necessary. You can be a world champion without ever touching a weight in your life. But you could never be a world champion without sparring all the time. That energy I could put into lifting weights I'd much rather put into wrestling or boxing. Weight lifting tires you out. If I were to do power cleans, my legs and my back would be sore the next day, and it would affect my grappling. To conserve energy you've got to cut something out, and I think weights should be the first to go.

As a big, strong 145-pounder, do you have any trouble making the cut?
For some reason I had a lot of trouble last time, and I spent a lot of time in the sauna. But I've always made it. I've never not made weight.

What are the last few days before the weigh-in like for you?
The last few days, it's all about losing weight. Cut my calories way back, cut my liquid way back, so I'm not in good shape to be training hard. I do a lot of slow runs, nothing crazy that would tear my muscles up. Lots of sweating. Maybe some shadow boxing. Concentrating on technique, but nothing hard. You want all your little injuries to heal and you want your muscles to heal.

How much do you weigh right now?
I think I'm a little under 160.

After you get down to 145 on Saturday for the weigh-in, how much will you gain back before you step into the cage on Sunday night?
I'll be around 160 somewhere.

How many more fights do you have on your UFC contract?
I think I have four or five left. I'm there for a while. I like it and it's where all the best guys are in my weight class. I'm in my prime now and I want to use that up on the best guys. I don't want to go somewhere else and fight lesser guys. The WEC has the best.

What long-term goals do you have?
Well, it was to get a title, but now it's just a matter of holding on to the title as long as I can. Take each fight one at a time and hold onto that belt as long as I can. Only good things can come out of that.