Rampage Jackson: Lyoto Machida Is Too Boring to Promote 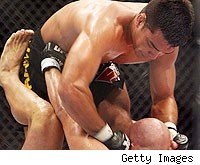 On a call today to promote his next fight, Jackson said he doesn't think highly of Machida's approach to fighting.

"Lyoto is a weird fighter," Jackson said. "He's kind of boring. I think that style works for him, the way he makes people run after him. I mean, he's good, he's undefeated, but he's boring. If I was the promoter of a show I wouldn't have guys like that fighting on my show."

Personally, I don't think Machida is boring, I just think his elusive style is unique. In fact, I think a Machida-Rampage fight would be extremely exciting, because it would match the guy who might have the best punching power in MMA with the guy who might be the hardest to punch in MMA. Contrasting styles like that often make the same fights, and Rampage vs. Machida -- which could very well happen within the next year -- would certainly not be boring.