B.J. Penn: Kenny Florian Fight Not an Option at UFC 99 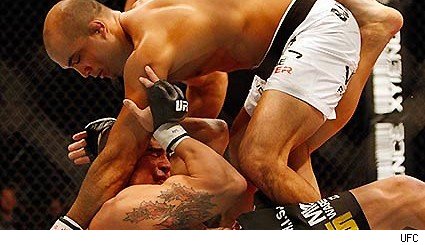 UFC lightweight champion BJ Penn won't fight Kenny Florian at UFC 99 in June, deciding instead that he prefers to fight in late July or early August.

"No, it's too close to BJ's last fight. He wants to spend time with his baby. ... We are still negotiating the fight. No date [is] scheduled, but we are thinking late July or early August."


I can certainly understand why Penn wants to have a long layoff, both to spend time with his new baby and to recover from the beating that Georges St Pierre gave him at UFC 94. But this means we're going to go 14 or 15 months without the UFC lightweight title being contested.

The fact that Penn only likes to fight once or twice a year sucks for UFC fans, and most of all it sucks for Kenny Florian, who is waiting around for the lightweight title shot that he's already earned.

"Schedule-wise it makes it a little difficult because money-wise, you expect a certain amount to come in and I've been trying to budget things accordingly," Florian told Sherdog. "It might be a little tougher now."

Penn-Florian should be a terrific fight. Too bad for Florian, and for the fans, that we'll probably have to wait until UFC 101.