UFC 95 Morning After: Dan Hardy Can Be a Star on Two Continents

The fans in London got a great night of fights when the UFC came to town Saturday night, and there was no better showing than the one put on by Dan Hardy, the local boy who made good.

Rory Markham, right, attempts to punch Dan Hardy during their match at UFC 95 on Feb. 21, 2009 in London, England.

Dan Hardy, right, connects with a devastating left hook against Rory Markham during their match at UFC 95 on Feb. 21, 2009 in London, England.

Dan Hardy watches Rory Markham recoil after his punch during their match at UFC 95 on Feb. 21, 2009 in London, England.

Dan Hardy quickly pounces on Rory Markham after his powerful punch during their match at UFC 95 on Feb. 21, 2009 in London, England.

Dan Hardy exalts after the ref stops his fight against Rory Markham at UFC 95 on Feb. 21, 2009 in London, England.

Diego Sanchez knees Joe Stevenson during their match at UFC 95 on Feb. 21, 2009 in London, England.


More Coverage: Post-Fight Interviews on UFC.com | Spike's Exclusive Highlights
Hardy, who defeated Rory Markham by first-round knockout, may have been the single most impressive fighter at UFC 95, an event that made up for a lack of star power with plenty of punching power. In his second UFC fight, he needed just 69 seconds to dismantle Markham, out-boxing a good boxer and using a powerful left hook as his knockout punch.

Hardy told me last week that England is going insane over the UFC, and it sure sounded that way from the reaction of the fans at the O2 Arena. The locals loved seeing their guy whip the American Markham, and the sheer jubilation shown by Hardy as he soaked in the cheers afterward was great. Already becoming a headlining attraction with UFC fans in Europe, Hardy can be a fan favorite in North America, too. He's a likeable guy, tough and well-spoken, and he has a personal flair that he shows off with everything from his haircut to his Web site.

Hardy has 27 fights under his belt, but the win over Markham was only the second time stepping into the Octagon, and I think he's just scratching the surface of what he can do. He's on a five-fight winning streak, and he's won 10 of his last 11, with the only loss in that span coming to Yoshiyuki Yoshida in a 2007 Cage Force fight in which he was on the losing end of a questionable disqualification.

How much better can Hardy get? I'd venture to say a lot better. He spends much of his time training in the United States, and he's fanatical about watching so much film of his opponents that he can close his eyes and picture everything they do. Hardy was submitted three times early in his career, but he has worked hard at getting better at grappling, and he says he hopes his next opponent is a jiu jitsu specialist because he wants to test his ground game.

Hardy is the first to admit that he's not ready for a fight against one of the sport's truly elite welterweights, like Georges St. Pierre or Jon Fitch. But even if it's not against a world-class opponent, I'm looking forward to watching the next time Hardy steps into the Octagon. He can be a star. 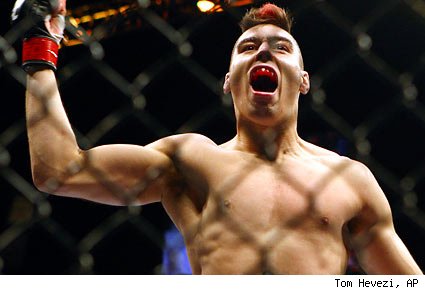 My favorite sights of UFC 95:
1. Junior "Cigano" dos Santos continuing to show amazing knockout power with his hands. After beating Stefan Struve on Saturday, dos Santos is 2-0 in the UFC, and neither opponent managed to last even 90 seconds before being knocked to the canvas by a brutal dos Santos punch.
2. The high-caliber corners in the Paul Kelly-Troy Mandaloniz fight. Rampage Jackson was shouting instructions to Kelly, while B.J. Penn was cornering Mandaloniz. When it comes to superstars giving their time and energy to support up-and-comers, I don't think any other sport can match MMA.
3. Nate Marquardt's methodical stalking of Wilson Gouveia, finally putting him away with a third-round TKO. Like fighters coached by Greg Jackson always do, Marquardt had an excellent game plan for the Gouveia fight, and he may have earned a middleweight title shot. 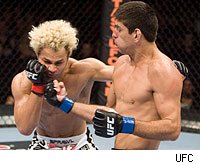 Knockout of the Night: Paulo Thiago, for his amazing uppercut-hook combination that sent Josh Koscheck reeling. It was the biggest upset in MMA so far this year.

Submission of the Night: Demian Maia, for a great display of high-level jiu jitsu against Chael Sonnen. Maia first applied a triangle choke from the top position, then rolled over to secure the tap-out. Maia now has five UFC fights under his belt, and he's 5-0, with all five wins coming by submission and four of the five earning the submission of the night award.

Fight of the Night: The main event delivered, as Diego Sanchez vs. Joe Stevenson earned the night's top honors.

Quotes of UFC 95:
"I think I deserve a title shot." -- Maia, in the Octagon after beating Sonnen.

"The Nate you saw tonight is not the Nate that fought for the title." -- Nate Marquardt, explaining why he is worthy of another title shot, even though he couldn't even make it out of the first round the first time he got a title shot, against Anderson Silva at UFC 73.

Silva will defend his belt against Thales Leites at UFC 97 in April; I'd love to see Maia and Marquardt fight each other for the right to take on the Silva-Leites winner.

Musical Notes
Rory Markham came in to "Amazing Grace" on bagpipes. Seemed more like the kind of musical choice you'd hear at a state funeral or something, but I still kinda liked it.

Good Call
The ending of the Marquardt-Gouveia fight was a good example of a good stoppage. Although Gouveia wasn't out cold, he had taken enough punishment -- and was having enough trouble defending himself -- that there was no reason to keep it going.

Bad Call
The ending of the Koscheck-Thiago fight was a good example of a bad stoppage. I know referees have to be extremely cautious about protecting downed fighters, but I think this bout was stopped too quickly. Thiago deserves all the credit in the world for flooring Koscheck, but Koscheck deserved the opportunity to show he could protect himself, as I believe he was trying to do when he stuck his arms out before the ref stepped in to stop it. 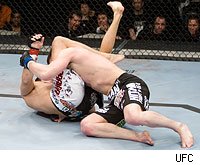 I just love watching Maia sink in a submission, and I love the way he exemplifies the philosophy of Brazilian jiu jitsu. It would be great if the people who decry MMA as too brutal could hear Maia explain, as he did after beating Sonnen, that he prefers to win by submission because he likes to win a fight without hurting his opponent.

Stock Up
The UFC on Spike. UFC President Dana White gave his fighters an impassioned speech on Friday, telling them to put on a great show to stick it to the people who were complaining that the UFC 95 card didn't have any big names, and put on a great show they did. UFC 95 obviously isn't as stacked a fight card as UFC 94 was, but this was the second time this month that fans got a fun show, for free.

Stock Down
Chael Sonnen. If you're going to go around saying you're better than Anderson Silva, you'd better back it up when you step into the cage. Sonnen looked like nothing special, and Maia made quick work of him.

Fight I want to see next:
How about Dan Hardy vs. Paulo Thiago? They're both welterweights, they're both rising stars, and they may have had the two most impressive showings Saturday. The next time the UFC is in the U.K., that fight would be perfect.