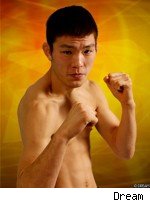 Shinya Aoki, the best fighter in Japan's Dream MMA promotion, will return to the ring at Dream.7 against the American David Gardner.

The Aoki-Gardner fight was one of two recently added to the official fight card at Dream's web site; the other was another lightweight match, featuring Mitsuhiro Ishida taking on Daisuke Nakamura. Dream.7 is also expected to feature six first-round fights in Dream's featherweight grand prix tournament.

Aoki is, by far, the best fighter on the card, which takes place on March 8 and will be broadcast on HDNet in the United States. I rank him No. 2 on the list of the Top 10 lightweights in MMA and No. 9 on the list of the Top 10 pound-for-pound fighters in MMA. Gardner is a mediocre fighter with a 16-10 career record, and it would be a big shock if Aoki doesn't submit him in the first round.

Aoki is also expected to move up in weight class and compete in the Dream welterweight grand prix tournament, which begins with Dream.8 on April 5.