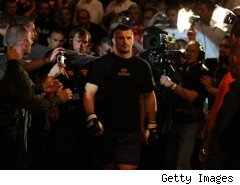 The Ultimate Fighting Championship's first visit to Germany is shaping up as a good night of fights, as UFC 99 on June 13 is rumored to feature a lightweight title fight of B.J. Penn vs. Kenny Florian, a co-main event of Wanderlei Silva vs. Rich Franklin, and possibly the return to the Octagon of Mirko "Cro Cop" Filipovic.

The Penn-Florian title fight is definitely going to take place this summer, the only question is whether Penn will be ready by June. Bloody Elbow is among a few sites today pointing out that Penn-Florian would make a lot of sense for the Germany show.

As for Silva-Franklin, MMA Weekly quotes Silva as saying the agreement is made. The only question is whether it would be done at 205 pounds, 185 pound, or possibly a catch weight. Although both Franklin and Silva are coming off losses and probably have their best days behind them, this is a fight that a lot of fans will want to see.

And then there's Cro Cop, who arrived in the UFC with great fanfare two years ago but left with a disappointing 1-2 record. Cro Cop is widely rumored to return to the Octagon at UFC 99, although no opponent has been named. (A lot of people think it will be Randy Couture, but that doesn't make a lot of sense; Couture is shooting a movie this spring and isn't expected to fight that soon.)

The one UFC 99 fight that appears to be more or less official (even though the UFC hasn't announced it) is Caol Uno vs. Spencer Fisher. If that fight is, in fact, joined on the card by Penn-Florian, Silva-Franklin and Cro Cop-TBA, the local fans will get a great show from the UFC's debut in Germany.