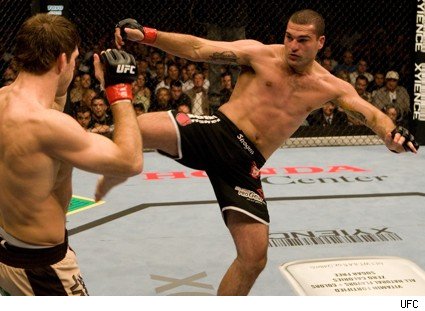 UFC 97 will take place as scheduled before a packed house at the Bell Centre in Montreal, as the Quebec Boxing Commission has dropped its opposition to the UFC's use of the unified rules of mixed martial arts.

The authorities in Quebec had been making noises about forcing the UFC to make significant rules changes, including eliminating strikes with elbows and knees, and even changing the size of its trademark Octagon. The UFC never would have gone for that, and if the Quebec authorities had insisted, the show would have been moved to Las Vegas.

Fortunately, the UFC was able to convince the Quebec authorities to let them go on as planned. According to Sportsnet.ca, the UFC agreed to only one very minor rules change, barring foot stomps on a fallen fighter. That's a minor concession that shouldn't significantly affect any of the fights.

So it's good news for MMA fans in Montreal, who will get to see the co-main events of Anderson Silva vs. Thales Leites and Chuck Liddell vs. Mauricio "Shogun" Rua. It's a shame that the Quebec authorities forced almost 20,000 fans to worry that they had bought tickets for an event that wasn't actually going to happen, but the right decision was made in the end.