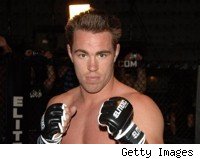 The former EliteXC welterweight champion Jake Shields is expected to fight Joe Riggs in the April 11 Strikeforce event on Showtime, in a bout continuing the trend of the extremely talented Shields being unable to work out deals to fight top-notch opponents.

MMA Mania and Around the Octagon are both reporting that the Shields-Riggs fight is set, and it will be added to a card that includes Frank Shamrock vs. Nick Diaz and Scott Smith vs. Benji Radach.

Sow how much better is Shields than Riggs? A lot better. In my own list of the top 10 welterweights in MMA, I have Shields at No. 5, and I didn't even think of listing Riggs in that 10. (The other nine spots in the Top 10 all belong to UFC fighters.) Riggs isn't in anyone's top 10; he doesn't even register in the Bloody Elbow meta-rankings and he comes in at No. 32 in the FightMatrix welterweight rankings. This is a mismatch.