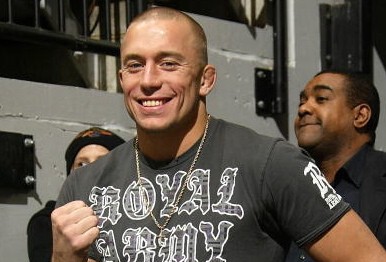 UFC 100 is the subject of constant speculation among MMA fans (even though we haven't even reached UFC 95 yet), so here's a rundown of what we know right now.

For starters, the event, which will take place July 11 in Las Vegas, is going to be a big one. When I talked to UFC President Dana White a couple weeks ago, he told me, "I'm guaranteeing you now, UFC 100 is going to kick f**king ass." White wouldn't confirm any fights, but expect it to be a card as stacked as UFC 92 was.

It's looking like the main event will feature welterweight champion Georges St. Pierre defending his belt against Thiago Alves. Both St. Pierre and Alves have indicated that they think that's when they're going to fight, and although the UFC hasn't given a formal announcement, White said on a Montreal radio show that it's going to happen.

I would guess we'll see two title fights on the card, with St. Pierre-Alves being one of them and then the other one determined by which of the champions feels like he'll be ready to go in mid-July. The only belt we know won't be on the line is the heavyweight title; Frank Mir and Brock Lesnar are squaring off at UFC 98 on May 23, so the winner won't be ready to defend his title just six weeks later.

Another fight that would make a lot of sense would be Dan Henderson vs. Michael Bisping. We know they'll fight each other at some point after coaching against each other on the upcoming season of The Ultimate Fighter, and the July show is probably the right timeframe for that fight.

Another fighter likely to be on the card include Wanderlei Silva, who said after losing to Rampage Jackson that he hopes to fight at UFC 100. And there have been hints that many of the organization's all-time greats, the guys like Chuck Liddell and Randy Couture, will appear on the card, although the timing for those two might not work out with Liddell fighting in April and Couture filming a movie this spring.

That's the speculation for now. There will no doubt be some surprises as the card gets closer, and there's little doubt that this will be a major event. Let me know which fights you want to see.