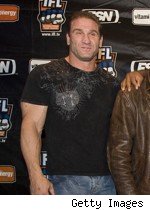 In a couple of freak show fights featuring competitors who are either morbidly obese, over the hill, or both, Ken Shamrock defeated Ross Clifton and Tank Abbott defeated Mike Bourke at the Wargods MMA event in Fresno on Saturday night.

Shamrock punched Clifton at the start of the fight to knock him to the ground, then put him in an arm bar and submitted him. It was, mercifully, short and quick.

Shamrock weighed in at 205 pounds, while Clifton weighed in at 380. The official write-up at Sherdog, which streamed the fight, says, "the size advantage didn't help Clifton at all." That's an utterly ridiculous thing to say; simply having an extra couple hundred pounds of body fat doesn't give Clifton a "size advantage." Clifton is a big, fat slob, and that's why Shamrock chose him as an opponent: Shamrock was on a five-fight losing streak and wanted someone he knew he could beat. Shamrock improves his career record to 27-13-2. Clifton falls to 6-9.

As for Abbott, who was last seen getting knocked out by Kimbo Slice last year, he knocked out Bourke in 29 seconds. That's nothing unusual for Bourke, who has been knocked out in 11 seconds and in 17 seconds in the past. Bourke now has a career record of 8-12-1. Abbott improved his record to 10-14.

Up next, apparently, is another freak show: Shamrock vs. Abbott is tentatively scheduled for April.

UPDATE: Shamrock's next fight will come against Bobby Lashley on March 21.