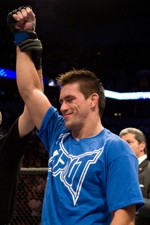 Demian Maia is a throwback.

As MMA has evolved, its most successful competitors have been well rounded, taking the most effective techniques out of each discipline. But Maia, who will fight Chael Sonnen at UFC 95 (Saturday on Spike TV), is proud to call himself a Brazilian jiu jitsu specialist. Make no mistake, the undefeated Maia -- like all successful MMA fighters -- knows how to fight on his feet. But he prefers to take the fight to the ground, where he can demonstrate for all the world his belief that Brazilian jiu jitsu is the best fighting style.

Maia talked to me about his love for jiu jitsu, his thoughts on the Sonnen fight and what he has to do to earn a middleweight title fight in the interview below.


Michael David Smith: I've heard it said that you have the best jiu jitsu of any fighter in all of MMA. Do you think that's true?
Demian Maia: I think I have good jiu jitsu. When I was competing in Brazilian jiu jitsu I was one of the best in the world. The thing is, I was good in bringing sport jiu jitsu techniques to MMA. I did well in the transition, bringing what I did in sport jiu jitsu matches into the Octagon.

What is the transition like from competing in sport jiu jitsu to competing in MMA?
It's not exactly the same, but a lot of things are pretty close. People say jiu jitsu is totally different from MMA, but when I'm in the cage I still feel like I'm fighting a jiu jitsu match. Of course there are some differences, but I've been thinking about fighting in MMA since I was a kid, so when I was in jiu jitsu, I was thinking about techniques for MMA.

Aside from yourself, who do you think are the UFC fighters who have the best jiu jitsu?
I like many guys. Antonio Rodrigo Nogueira is good. Georges St. Pierre now is very good at takedowns and his top game -- when he's fighting from the top, taking people down and passing their guard, he does that really, really well. He could do well for sure in a jiu jitsu tournament. B.J. Penn is also very good. There are many, many guys who are good at jiu jitsu. Anderson Silva is very good on the ground. He submits some guys.

Silva is the champion in your weight class. If you get a title shot against him, do you think your jiu jitsu would give you a chance at beating him?
I think my jiu jitsu would give me a very big advantage. Jiu jitsu is very effective in MMA and vale tudo. I have superior jiu jitsu and I think I would bring that to the fight. But Anderson is, to me, the best fighter in the world. He's very well rounded, very complete, very hard to beat. He has more experience than I have. But I know I would like to challenge him. I can't wait.

You have an undefeated record. How close do you think you are to getting a title shot?
I think maybe one or two fights away.

And you know him personally?
Yes, he's my friend, we've known each other since we were younger. We've fought against each other two times, he won once and I won once. We talk and are friends.

How did you first get into jiu jitsu?
I always was involved in martial arts since I was a kid. Judo when I was four years old, then kung fu, then karate, then I moved to jiu jitsu. I started training in jiu jitsu and I really liked the art, and now I've been training in it for many years.

I've seen some jiu jitsu instructional videos you've done on YouTube. What made you decide to do those?
Well, the producer just asked me to do a series of DVDs, The Science of Jiu Jitsu, he liked it and I did another series. We've made many DVDs and they've put some parts on YouTube. (One of Maia's videos is below.)

You won the submission of the night bonus in each of your first three UFC fights. How much did that extra bonus money mean to you?
It means very much. I invest a lot of money in my training -- I spend too much money on my training. I really don't save money in training because I'll spend on whatever will help me in training, travel anywhere I need to. And I help many people in Brazil -- my family and people around me, so it's very important. I don't come from a family that has money, so it's very good for me.

Are you satisfied with your UFC contract? Do you think they pay you enough?
Yeah, yeah. I'm very satisfied with my contract. I know if I start doing better I'll get more and more. It's just business. They've given me bonuses, they treat me really well. I have nothing to complain about.

In general, American fans tend to prefer the stand-up game to the ground game, fans will boo when the fight is on the ground for a long time and cheer when it gets stood up. Does that bother you?
No, I think American fans are learning more of the ground game. They don't like boring ground game when nobody is doing anything, but that's the same thing when guys just stand up and don't do anything.

We know you've got good jiu jitsu, but how good do you think your stand-up is? Are you confident that you can win a fight on your feet if you have to? Do you think you might win a knockout of the night bonus some day?
Yeah, I'm sure I can win a stand-up fight if I need to. It's not my strongest point so when I can go to the ground I will go to the ground. But I train in stand-upand I think in this game you should be able to do everything.

You said after your last fight that you never have a strategy coming into your fight. Why is that?
Because I like to go and feel how the fight is going. I like to avoid the strength of my opponent, like if he has a good right kick I'll avoid that, but I don't like to have a strict strategy, like, "I'm going to put this guy down and then put him in half guard." I'm not that specific with my strategy.

How influential has the Gracie family been in your development as a fighter?
I saw some of the Gracies fighting in Sao Paulo, my city, when I was like 13 years old, and I remember I was just impressed with how easily they won, fighting against guys with different styles, like kickboxing. This was before the UFC, and the Gracies were ahead of everyone in the world in martial arts. They put their sport, Brazilian jiu jitsu, on the map.

How popular is the UFC in Brazil?
Very, very popular. It started with Royce winning the first UFCs. But I think it's more popular in the United States. The UFC got so popular that people don't even say "MMA," they say "UFC," because they think the sport is the UFC. They've done such good work.

What's your general feeling about Chael Sonnen as an opponent?
He's a very professional fighter. He has good takedowns, good ground and pound. It's a dangerous fight for me. If he comes to fight to try to knock me out or submit me it's going to be a good fight.

How would you beat Silva?
I know the strongest part of my game is my jiu jitsu, so that's how I could beat him. But it wouldn't be easy. He's the best fighter in the world.

With a week to go until the fight, what is your preparation like right now?
The training is getting shorter, but I'll work out about twice a day. The week of the fight I take it easy and don't do any sparring.

I've heard you have a degree in journalism. What made you decide to study that?
Because when I was a kid I liked to write. I liked sports, but when I was a kid I also liked to read and write. I also thought about veterinary medicine but I decided to study journalism. I still have a lot of friends from college who are working in journalism, and that's what I would be doing if I hadn't started my jiu jitsu career.

And your wife is a journalist too?
Yes. She works at a magazine in Brazil.

Has she ever written about your MMA fights?
No, no, no. She's interested in my career -- she likes the sport -- but she's too nervous to watch me. She only watches on tape. Live on pay-per-view she wouldn't watch. She'll watch me in sport jiu jitsu, but not in MMA.

She doesn't like to see you get punched in the face?
Yeah, I think so. Sometimes MMA is a little too aggressive for her to watch.

Your bio on UFC.com says that your favorite technique is to "Submit my opponent without him hurting me or me hurting him."
It's basically the philosophy of Brazilian jiu jitsu. You control your opponent. You put him down. You get the submission. But you're not going to hurt your opponent, you give him the decision to say he wants to stop. I think it's a nicer way to win than a knockout.