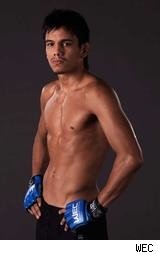 It's really not that often in MMA -- maybe a handful of times each year -- that we get to see the two best fighters in any given weight class step into the ring or cage together. But one of those handful of times has just been officially announced, as Miguel Torres will square off against Brian Bowles in the main event at WEC 40 on April 5 in Chicago.

I was just compiling my own list of the Top 10 bantamweights in the sport when World Extreme Cagefighting made the official announcement of the Torres-Bowles fight, and I think it's clear that they're No. 1 and No. 2 in the 135-pound weight class.

Torres has so dominated his weight class that he's usually considered among the Top 5 pound-for-pound fighters in MMA (I rank him fourth), while Bowles is undefeated and has never even gone the distance with any of his seven opponents. Their fight on April 5 should be a great one.

My full list of the top 10 bantamweights in MMA is below.