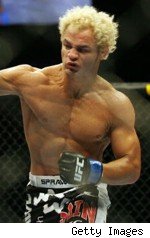 In preparing for his fight with B.J. Penn at UFC 94, Georges St. Pierre came up with a cunning approach that included everything from hours of studying film of Penn's fights to consulting with kinesiologists who helped him develop a strategy that would force Penn to overuse his shoulders, building up lactic acid and fatiguing his muscles.

St. Pierre had a masterful strategy, but not everyone thinks MMA fighters need good game plans. For the alternate point of view, consider what Josh Koscheck says about his upcoming fight against Paulo Thiago at UFC 95.

Here's a snippet from an interview with Koscheck conducted by Ben Fowlkes at CagePotato.com:

What do you know about your opponent on the 21st, Paulo Thiago?

I really don't know anything about him. To be honest with you, I don't even know what he looks like. I've never seen video on him, nothing. For me, it's a fight. I expect to go in there and fight and just do what I do, which is win.

Is the reason you haven't seen any video on him because you can't find any, or because you don't care to look?

I just don't even care to look. I don't care to watch it. I don't watch video on any of my opponents. For me it's just another fight.