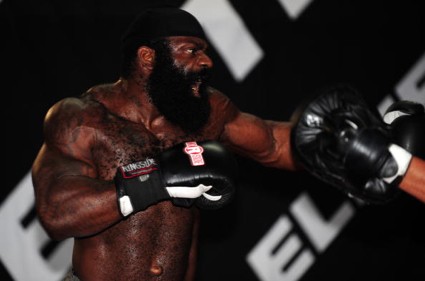 Strikeforce wants to showcase Kimbo Slice (but not in main events), could offer Tito Ortiz a contract, would love to promote Alistair Overeem vs. Fedor Emelianenko, and has nothing but respect for Dana White and the UFC.

Those subjects, plus Gina Carano vs. Cris Cyborg, a Frank Shamrock vs. Cung Le rematch, and the reason Ken Shamrock may never fight on television again, were discussed when I interviewed Strikeforce founder and CEO Scott Coker on Wednesday. The interview is below.

Michael David Smith: Let's start with Kimbo Slice. You could make a pretty good case that Kimbo is both your most famous fighter and your least skilled fighter. So what's the strategy for promoting a guy who has this larger-than-life personality, national TV and magazine covers, but just isn't all that good at MMA?
Scott Coker: Well, in the past I think Kimbo -- you're right. His skill level is a guy who's up and coming and trying to learn MMA. Let's face it. He beat Tank Abbott and Bo Cantrell, but he's only had three or four fights, and it was almost unfair to him because he had to do so much as a fighter so quickly because of his popularity.

It reminded me of Bob Sapp, this guy who was a great athlete, a football player, in K-1 in Japan. He trained for six months and knocked out Ernesto Hoost, who was a K-1 champion. So everyone thought Bob was going to be the guy, and then he fought Mirko Cro Cop and got an orbital fracture. He needed to take a step back.

So for Kimbo, my suggestion is let's sit back, get you back in the gym, and you don't have to be a main event. Let's get you 10 or 12 fights and then maybe move on from there.

But you do expect Kimbo to fight for Strikeforce in 2009?
Yeah, I'm expecting him to fight. I'm sure he wants to fight. I think he'll want to get back in the cage at some point in '09. I think it's just a matter of where we fight, who we fight, and some of those conversations just haven't happened yet.

Will Jake Shields fight for Strikeforce?
Yeah. We're in talks right now with his father, who is his manager, and we're trying to get him on board for our April 11 fight card. Some of the opponents who were thrown around were either Joe Riggs, Jay Hieron, maybe Phil Baroni.

Jake wants to fight the top welterweights. Realistically, can you offer him a fight with the top welterweights, or are they all in the UFC?
I think he's a fighter who has a lot of goals. I can't speak for Jake, but I think he wants to be the best in the world, and I think there's a couple we have who could be a good match-up with him. Especially with our relationships in Japan. And Jake did say he would love to fight Frank Shamrock, he would love to fight Robbie Lawler, and he's willing to move up and fight at a catch weight. At the end of the day, he wants fights that will enhance his career, and I think we have some fighters he can take on, on our roster.

Alistair Overeem is your heavyweight champion. When will we see him defend his belt?
I'm hoping before the end of '09. As you know, he's been very busy beating everyone up in K-1 and in Dream. We're hoping we can get a fight with him by the end of the year. I think he's one of the top four or five heavyweights in the world.

Alistair has said he'd like to fight Fedor Emelianenko. Is there any conceivable way that could happen in Strikeforce?
Yeah, why not? I don't see why not. I know Fedor is working with Affliction right now, but in the future you never know. If we could put that fight together, that would be fantastic. ... When (Overeem) first started fighting with us in '06, he was just a young kid, I think he was 25 years old. So he's just getting to his peak. He has great stand up, and although he's not a jiu jitsu guy, he's developing his ground game to where he can be effective with submissions. He's one of the best in the world. Him and Fedor, boy that would be some match-up, huh?

I assume you have no interest in EliteXC's heavyweight champion, Antonio Silva, because of his failed drug test and subsequent fight in Japan?
Yeah, I called the California State Athletic Commission and I asked their position on that fighter, and they said he's going to have a hearing in July. ... He's going to probably end up fighting in Japan, for the next 12 months or however long he's on suspension, and that was the primary reason for us not to engage in a relationship with him.

Is it fair to say your middleweight champion, Cung Le, is an actor first and a fighter second?
Oh, I don't think that's accurate. Cung Le is now just getting into his acting career, and he's doing very well. But he and I spoke yesterday, and if Frank beats Nick Diaz, Cung Le and Frank Shamrock will be the next fight. That's been confirmed.

How long for that?
Probably four or five months after the fight. It depends on how Frank is. In MMA you never know, but if Frank wins that fight, he will be fighting Cung Le in a rematch of what was probably the best fight of the year last year.

What about Ken Shamrock? My sense in talking to people at CBS is that they've been furious with Ken since he pulled out of the Kimbo fight and frankly they don't want anything to do with him. Is that your sense?
I think that's accurate. The folks at the network really have no desire to work with him. So we did not pick up Ken's contract.

So is there any chance of Frank vs. Ken in Strikeforce, or would that have to happen in the Shamrock family backyard?
If it does go in a backyard I'd sure like to promote it. But seriously, I think that fight should happen and I think it would create a lot of interest. The Shamrock name in the history of MMA is going to be in the books, and there's a story to be told, and it's an amazing story. But at the end of the day, it's going to have to be something that makes sense for everybody, including the TV partners. Showtime and CBS are our partners, and I'm not sure if they're going to be up for that any time soon.

Is K.J. Noons vs. Josh Thompson confirmed for your April 11 card?
No, it's not. That's the other half of the card we're working on right now. We should probably have the full card confirmed by the end of the week.

Is the future of MMA a combination of some fights on network TV, some on basic cable, some on premium cable and some on pay-per-view?
Yes. I think it's a combination.

Are you a competitor to the UFC?
Well, when you say competitor, that means we're in the same industry, and to be very honest, it's an industry that they built. We're very respectful of that. If Lorenzo Fertitta and Dana White didn't come in in 2001 and buy the UFC from Bob Meyrowitz and put all their resources and passion into the sport, the sport probably would be dead. Or it would be an underground thing and you'd hear horror stories. We're very respectful of that.

They do what they do and we do what we do. When I think of competitors, I think of trying to affect each other's businesses, and trying to cause trouble with fighter relationships, but I think this industry is not going anywhere and we're just trying to do our part.

Do you expect the UFC to treat you like a competitor? Will they put a show on Spike on April 11?
I can't answer for them. Traditionally, Dana and those guys have been really good to me, and I have a lot of respect for them. In our household, every pay-per-view they do, all year long, we buy every one of them. Even the ones from England.

Do you know Dana White and the Fertittas personally?
I've met them, yes. Dana and I have had conversations on the phone a couple times. They've always been nice to me.

You seem like you're just focusing on your own promotion and not on the UFC.
I think this is a historical point for us. We look forward to putting on the best fights in the history of Strikeforce.