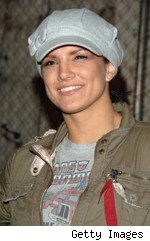 The Strikeforce mixed martial arts promotion has not yet finalized a deal with MMA's most popular female fighter, Gina Carano. But it does have a deal in place with the woman everyone wants to see Carano to fight, Christiane "Cris Cyborg" Santos. And Strikeforce founder and CEO Scott Coker told me Wednesday that there's a 50-50 chance a deal with Carano will get done in time for the Carano-Cyborg fight to take place on April 11.

Coker said Cyborg will definitely appear on the card, and the only question is whether Carano will agree to be Cyborg's opponent.

"We're in dialogue with Gina," Coker said. "We did invite her -- through her manager -- to fight Cyborg on April 11. Cyborg is ready to go, and I think at some point today there will be further dialogue with Gina."

"I've just always supported women's martial arts fighting," Coker said. "When we were doing kickboxing we had women's fights on all the cards, and they were getting standing ovations for the fight of the night. ... When you watch women's MMA, there's some tough girls out there that can bring it, and Gina Carano has shown that a superstar can be developed from female fighting."

So how likely is it that Carano vs. Cyborg will take place on the April 11 card in San Jose, which is headlined by a main event of Frank Shamrock vs. Nick Diaz? Coker said it's a 50% chance.

"My gut feeling right now is we have a shot at it, and it's 50-50," Coker said. "She'd have to sign, start training camp and get going, but I think there's a 50-50 shot we can make it happen. This first fight card, we're promoting it as the greatest card in the history of Strikeforce. I think we've had some good fights in our history, so we have to deliver."