Wilson Gouviea: When I Look in the Mirror I See a UFC Champion 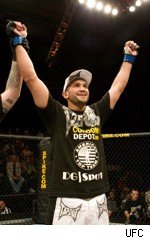 Wilson Gouveia had one of the most impressive 2008 campaigns of any fighter in the UFC. He opened the year with a knockout victory over Jason Lambert in January, finished it by destroying Jason MacDonald in December and earned the submission of the night award in beating Ryan Jensen in September. Even the fight he lost was impressive; he earned a fight of the night bonus in defeat against Goran Reljic at UFC 84.

But as Gouveia gets ready for his first fight of 2009, against Nate Marquardt at UFC 95 (February 21 on Spike), he knows there's a lingering question hanging over him: After coming in four pounds overweight for the fight against MacDonald, some fans wonder whether he's just too big to be a middleweight.

I talked to Gouveia on Tuesday, and he said that not only is he sure that he's a middleweight, he's confident that he's a future middleweight champion. The full interview (which covers his preparation for the Marquardt fight, the importance of those UFC bonus checks and how he first saw the UFC as a teenager in Brazil) is below.

Michael David Smith: We're 11 days out from the fight. How are you doing and what's your preparation like at this point?
Wilson Gouveia: Excellent. I've never felt like this before a fight. I'm at the top of the game right now. My conditioning is great, I'm doing cardio because I don't want what happened last time to happen again. I'm cutting weight already. I'm already skinny because I don't want to miss weight again.

And getting down another 13 before the weigh-in won't be a problem for you?
Not at all. Not at all. My whole career I fought as a light heavyweight and I used to walk around at 220 and cut down to 205. Now that I'm a middleweight as long as I'm under 200 pounds I'm fine.

What kind of fight do you think you'll get from Nate Marquardt?
I think it's going to be a very exciting fight for the fans. Both of us are very aggressive fighters. He's shown in his past fights that he's not afraid to trade in the stand-up game, and he's not afraid to go to the floor.

If you beat Nate, where do you think that would put you in the middleweight rankings, and how many fights do you think you need to win to get a title shot?
It all depends on what the UFC wants. Thales Leites is fighting Anderson Silva, and Thales beat Nate, but it was very controversial because he only beat Nate because Nate got deducted two points. I think Nate beat him in the fight. But I don't want to think too much about what goes after Nate because I respect him. He's a very, very dangerous fighter. I've got to take care of business first.

Is getting a title shot against Anderson Silva a goal of yours?
Yes. I'm in this business because when I look in the mirror I see myself as a UFC champion. I think I have all the tools and all the talent to accomplish that, and that's my goal, to be the champ. To have a chance, to have a title shot, that would be my ultimate goal. That's a dream.

Last year you got a fight of the night bonus, a submission of the night bonus and a knockout of the night bonus. Did that bonus money make a big difference in your life?
Oh, yeah, no doubt about it. It was a huge difference. I can't tell you how much. A lot of people think the fighters should get more money, but in my personal opinion the UFC is really taking good care of me. I can't complain at all. Last year I made some decent money -- enough to get myself and my family some nice gifts. It makes life a little easier.

UFC 95 will be your second time fighting in England. What do you think of the British fans?
I love them. They're very nice fans. They treat fighters with a lot of respect. They're huge fans of the sport and of the UFC, and I can't wait to go there and put on a performance for those great fans.

You fought four times in 2008 and now you're already about to fight again in 2009. Are you concerned at all that you don't give your body enough time to recuperate between fights?
It's funny that you ask me that because I was just talking to my training partner after we trained this morning about it. It's a good thing, but at the same time it's a bad thing. If you don't give enough time to yourself sometimes you get worn down, not only physically but mentally. It's a tough sport. You've got to get in the cage, and it's a lot of pressure. Every fight you've got to win, because that's how I make my money. That's how I feed my family. You don't have much down time. You train, you fight, and then you've got to get back in the gym and get ready for the next fight. You spend all your time in the gym training.

How did you get into mixed martial arts?
I've been doing martial arts since I was a little kid. In Brazil, when I was 6 or 7 years old my mom put me into karate, and then aikido, and then I took judo for like five years, and then when I was 15 years old or 16 years old I started jiu jitsu.

When did you realize that you could make a living in mixed martial arts?
To make a living it wasn't until I was in the UFC (in 2006). Because in 2004, 2005, I was making $500 or $1,000 a fight. That's not enough money to give you enough motivation to go into the gym and train your ass off to fight. When I got into the UFC, I knew it was a huge opportunity for me. Getting into the UFC was a big day in my life.

When did you first see the UFC? Were you a Royce Gracie fan growing up in Brazil?
I was doing judo at the time and I had never heard anything about jiu jitsu. A friend of mine brought me this tape with the first three UFCs, and said, "Let's watch this tape. It's a real fight." And I was like, "What do you mean, a real fight?" And he said, "It's got martial arts fighters, jiu jitsu, judo." And then I watched the fights and I was in shock: "Oh my God. I love this thing. It was so exciting to see Royce Gracie -- a skinny guy -- fighting these big dudes and taking everybody down and submitting them." And I knew I had to find a gym that would teach jiu jitsu.

Was it a source of pride for you that a Brazilian fighter was winning in the UFC, beating fighters from America and around the world?
Yes. You know, his name is not a common name in Brazil, Royce Gracie. So I was like, "Man, this guy is Brazilian?" Because Royce isn't a common name in Brazil. And then finding out he was Brazilian was when I knew I had to take jiu jitsu. I used to take three buses just to get to the gym and three buses to get back home, just to go and learn jiu jitsu.

So you were dedicated at a young age.
Yeah, but when you're young you've got nothing to do except go to school, and you have all this energy. I used to go there and do three or four hours of training, every single day of my life.

Who's the best opponent you've ever fought?
I respect all my opponents, every one of them. But my fight against Keith Jardine, I learned so much from this guy. He's tough, man. I was fighting a guy who was standing in front of me and coming at me. I think he's the best I've ever fought. And he's a cool guy, also.

Do you have one opponent you most want to face?
No, I don't do this to prove anything to anybody. I do this because it's what I do best. That's how I feed my family, that's how I pay my bills. I don't have anybody in particular I want to fight. This is just how I pay my bills, and I don't choose my opponents. The UFC does that. I'll fight anybody.

It sounds like at age 30 you've got a job that you're good at and, as you say, pays the bills.
Yeah, it's a pretty good job. I can't complain. The UFC is paying me very well. But at the same time you can't fight forever. I'm not going to fight forever. I've got this huge opportunity in front of me where I can be the champ, and once I am the champ I'll make some real money and set my family up for life. But to get to that point I've got to work hard to make that happen. You see a lot of professional athletes, in all sports -- guys who used to play baseball they're broke, guys who used to play football they're broke, Mike Tyson -- broke. So I want to make sure I set up my wife and my kids so they don't have to worry about money in the future.

Have you thought about what you're going to do when you're done fighting?
Not really. My whole energy, everything I have, my whole focus, is on fighting right now. I don't have time to think about anything else. I'm just hoping to fight, and the fans can expect the best out of me on February 21 because I've been training very hard for this fight. I'm ready. I can't wait. I wish the fight was tonight because I'm ready to go.