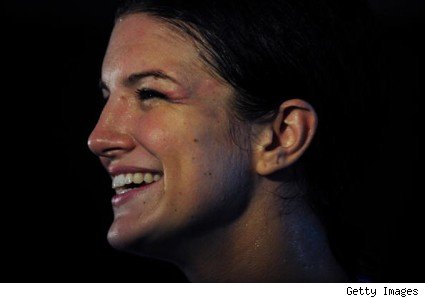 We may soon see the first superfight in women's MMA, as Strikeforce is getting closer to making a fight between Gina Carano and Cristiane "Cris Cyborg" Santos a reality.

Loretta Hunt of Sherdog is reporting that Cyborg has agreed to an exclusive four-fight contract with Strikeforce and has canceled a previously scheduled fight with another promotion. Strikeforce has also indicated that it will promote Carano, although so far Carano has not said whether she will agree to fight for Strikeforce.

Carano vs. Cyborg is the fight that every fan of women's MMA wants to see, and it would be by far the biggest fight in the history of women's MMA. It's a big enough fight that it could work as a main event on a card otherwise made up of male fighters, and it's a big enough fight that Zuffa, the parent company of UFC and WEC, would have been willing to abandon its longstanding polity of not promoting women's MMA if it could have gotten both Carano and Cyborg to sign on the dotted line.

However, it's not a sure thing just yet. Although Strikeforce says that it purchased Carano's contract from EliteXC, Carano's management likely has other ideas, and she might not be willing to fight for the relatively paltry wages that EliteXC was paying her.

That means there's still some negotiating left to do, but the people who run Strikeforce are smart, and the bet here is that they'll figure out a way to get it done. Carano-Cyborg is too good a fight not to happen.