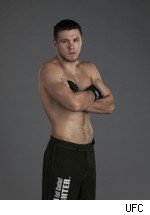 When three-time NCAA wrestling champion Jake Rosholt left Oklahoma State and decided to become a professional MMA fighter, a lot of people in mixed martial arts thought he had future star written all over him.

But in his first Ultimate Fighting Championship fight tonight at UFC Fight Night 17 in Tampa, Rosholt was whipped by the more experienced Dan Miller, who needed just over a minute to catch Rosholt in a guillotine and get him to tap.

A few months ago Rosholt had a 4-0 record and was getting some buzz as one of the sport's most promising prospects, But in November he struggled to win his first big-time fight, at WEC 36. And when the UFC added him to its stable, it didn't give him an easy first fight, matching him up with Miller, a solid fighter with a strong jiu jitsu background.

That jiu jitsu background was all Miller needed against Rosholt. It took Miller just 1:03 to sink in a guillotine and force Rosholt to tap, a one-sided victory that raises questions of whether Rosholt is going to be the kind of MMA fighter that so many hoped he'd be coming out of Oklahoma State. With the loss, Rosholt falls to 5-1 in his MMA career. Miller improves to 11-1.