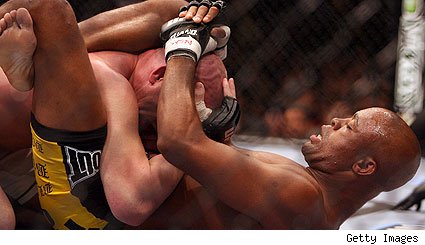 During the last year, UFC middleweight champion Anderson Silva has been the subject of a great deal of retirement speculation, with some fans concerned that the UFC's most dominant champ could walk away. But Silva's manager says he doesn't think Silva is leaving MMA any time soon.

Manager Ed Soares says that while they've had talks about Silva (who turns 34 in April) retiring at age 35, those talks have been about getting Silva in a place where he's financially secure enough that he could walk away by the time he's 35. But just because Silva would be able to retire at 35, that doesn't mean he's going to.

"When he came out and we started representing him, I asked him what his long term goal was. He always said he imagined himself retiring at 35," Soares said on HDNet's Inside MMA. "That's his goal. And my goal as his manager is to set him up financially so that he has a choice. Do I think he's going to retire at 35? No, I don't."

Fighting for a living is tough, and it's not surprising that fighters often muse about retiring. But I think (and hope) Soares is right: We've got at least a few more years of watching Silva.