Jeremy Stephens Got His Break, Gets Ready for UFC Fight Night Main Event 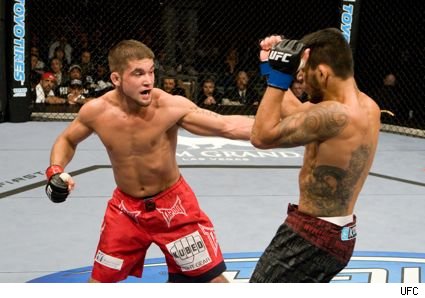 Three months ago, Jeremy Stephens was just trying to make a living as an MMA fighter, earning a few thousand dollars a fight working UFC undercards and $400 a month in endorsements. Then came UFC 91.

"I have a daughter on the way," Stephens told me when I caught up with him on Thursday. "That bonus is something special to me. I couldn't be happier with the outcome and the way things have turned out for me."

Now the 22-year-old Stephens is set to fight on his biggest stage yet, in the main event of Saturday night's UFC Fight Night, where he'll take on Joe Lauzon live on Spike TV. He told me that he's proud to have worked his way up from the bottom rung of the UFC to the point where he is now, as a main event fighter.

"Some fighters think just because they're on TV they deserve all this attention and all this pay," Stephens said. "I disagree. I think it's kind of cool that we start out at the bottom, because then you have to work your way up. The pay may not be the best at first, but if you fight and work your way up, you get paid like the best. Even if we're not getting paid millions of dollars, there's always that bonus, which makes guys fight hard and strive to get better."

Hard work was only one part of getting the Fight Night main event. The other part was luck -- bad luck for Stephens' friend and training partner Hermes Franca, who was initially scheduled to fight Lauzon before suffering a torn ACL in training last week. Stephens readily stepped in to replace Franca, and he said he's confident in his abilities to take on Lauzon even on short notice.

Stephens added that he hopes to still be able to take the fight he had previously accepted, on April 1 against last season's Ultimate Fighter winner, Efrain Escudero.

"I did say when I took this fight I still want to be able to fight April 1,'" Stephens said. "I want to take advantage of all the opportunities that come my way. I'm young, I'm healthy and I recover fast."

I asked Stephens who his favorite fighters were when he was growing up, and I thought he'd mention Randy Couture or Chuck Liddell, But Stephens told me he's long been interested in the history of combat sports, and it was a couple of boxers who retired before he was born who most influenced him.

"I love Muhammad Ali and Jake LaMotta," Stephens said. "I've always watched those old classic boxing matches. I like the way they fought. They came to fight. That's what I respect."

Stephens said coming to fight is exactly what he tries to do.

"If a guy gets hurt I call my manager and ask to step in," Stephens said. "I want to be ready at all times. I want to show the UFC that I'm ready and that I'm 100 percent serious, I don't mess around, I go for knockouts and submissions, I go to finish fights, I don't bulls**t. If a guy gets injured, it's unfortunate for him, but I want to be there to fill in."

That attitude makes MMA the perfect sport for Stephens, and he told me that getting involved in MMA -- which he started watching when he was in fifth grade and started training in when he was 16 -- has shaped his whole life.

"I was never an academic kid -- I mean I did OK, I passed -- but I was always into sports," Stephens said. "With MMA, it purifies your life. Dieting right. Eating right. You do those things and it reflects on every part of your life. It makes you healthy in your outside life as well."

Stephens told me he has a list of personal and professional goals he wants to achieve, ranging from taking good care of his daughter and winning three fights in 2009, to having his home paid off within the next five years.

"I like to challenge myself," he said. "I'm just trying to write my own story."