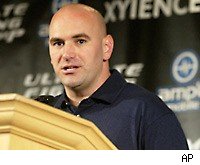 The Ultimate Fighting Championship is on a roll on pay-per-view, with events that did in the neighborhood of 1 million pay-per-view buys in each of the last three months -- an unprecedented level of pay-per-view success for any organization in any sport.

But when I talked to UFC President Dana White on Wednesday, he sounded more excited discussing the fights that the UFC is putting on for free on basic cable, starting with this Saturday night's UFC Fight Night on Spike TV. White said he views the Fight Nights as similar to the old Tuesday Night Fights program, which helped build some of the young boxing stars of the 1980s and 1990s, and he pointed out that after the UFC put three shows on pay-per-view in a five-week stretch in December and January, it's now putting three of its next four shows on free TV.

We also discussed UFC 94 and the controversy over welterweight champion Georges St. Pierre having Vaseline applied to his body during his win over lightweight champion B.J. Penn. The full interview is below.

You went into UFC 94 with high expectations, that it could be the biggest event you've ever done. Did it meet your expectations?
We were very happy with the weekend. It was crazy. It was one of our most hyped-up fights. This thing was so sold out that the day of the event the MGM Grand literally added like 165 seats in the $750 price range, putting seats where ever they could fit them. I've never been part of a fight like that. To be honest with you, I'm still f**king drained from it, man. I've been exhausted this week from that fight.

I know it's really the Nevada Athletic Commission, not the UFC, that is conducting this investigation, but how concerned are you about the incident with Vaseline being rubbed on Georges St. Pierre's body?
It's one of those things. His corner man -- you can clearly see -- when he puts the Vaseline on his face, he rubs his hands on his shoulders and rubs his chest and back. You cannot do that. You can't do that. It's illegal. You have to wipe your hands off. It is what it is. I'm sure the commission looks at that.

Do you think he meant to do it?
I don't know. I honestly couldn't answer that. I couldn't give you an honest answer. If he didn't know, how do you go in and corner somebody and not know the rules?

When do you think we'll see Lyoto Machida again and who might his opponent be?
That's a good question. That's going to depend on how the light heavyweight fights shake out in the next couple of fights. Obviously, Keith Jardine and Rampage Jackson are fighting (at UFC 96). Rampage is next in line for a title shot.

Assuming he beats Jardine?
Yeah, Rampage was supposed to fight Rashad Evans, and Rashad wasn't ready to fight. Rashad was just coming off the Forrest Griffin fight, he was all beat up, he wanted to take some time off, so Rampage said f**k it, I want to fight anyway. Give me another fight.

Rampage wants to keep fighting and stay active, which I love. I love guys like that. That's the way Chuck Liddell was, too. Chuck didn't want to wait for anything, he just wanted to keep fighting. People respect that. I think that's why Chuck became so big.

So Lyoto is in that top tier but we'll have to see how the other fights shake out before we'll know who he's going to fight next?
Yes.

Let's get to Saturday night's Fight Night. You were forced to scramble to replace Hermes Franca in the main event. Are you satisfied with Joe Lauzon vs. Jeremy Stephens as the top fight?
Yeah, it's a good fight. I like Stephens. He's always been an exciting fighter. I like that kid. I like him a lot. Personally and professionally. He's a good kid. Hermes Franca always brings it. He is always aggressive, always coming forward, always trying to press the fight, and Jeremy Stephens is too. It's a great replacement. A great replacement.

Looking at the card as it stands now, the first thing I notice is that these are young guys; Lauzon is 24 and Stephens is 22, and I think all eight fighters on the main card are in their 20s. Do you make a conscious effort to use the Fight Nights to promote the young up-and-comers?
Yeah, I think you'll also see the guys that don't win The Ultimate Fighter, but we think have promise, usually star on Ultimate Fight Nights. After Season 2 of The Ultimate Fighter Rashad Evans fought on a ton of Fight Nights.

One of the problems in boxing is that they don't build up the up-and-comers.
Yep. They don't spend any money to promote any new guys at all. Nobody invests any money in the sport of boxing. They just take from it.

Cain Velasquez only has four fights on his record, he's destroyed all four of his opponents. Is he a guy you expect to become a heavyweight title contender?
Yes. He's another great up and coming heavyweight. I think he's one of the best out there and I think he's going to be a force in the future. Another great fighter. 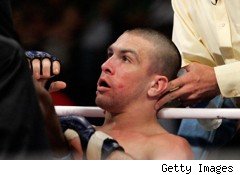 Josh Neer will be fighting Mac Danzig even though he was arrested for drunk driving and felony eluding on New Year's Eve. Did you consider pulling him from the card because of that?
No. He came to us and talked to me about it, and no, I didn't consider pulling him. As long as his head was together and he was training, listen -- we're all human beings. We all make mistakes. My thing is how do you handle them. How do you deal with it after? You get all this stuff in sports about the role models and this and that, but listen. We're all f**king human. I make mistakes every day. He made a mistake.

And you're confident that he has learned from it and he's going to handle it well moving forward?
Yes. If he doesn't he'll be gone. That'll be the end of his mixed martial arts career. I don't think he has a choice. Or he'll end up in jail.

Anthony Johnson is getting a pretty quick turnaround, fighting less than two months after he beat Kevin Burns. Is he someone you're trying to make a big effort to promote after that great knockout kick the last time he stepped in the cage?
Yeah, Ultimate Fight Night is the place where we showcase tomorrow's pay-per-view stars.

Looking beyond Fight Night, what do you see as the biggest fights of 2009, and do you think you'll have a card this year that could top the three big ones you had in the last three months?
Definitely. We've got Mir and Lesnar coming up, we've got possibly Rashad and Rampage, or if it's not Rashad and Rampage it'll be Rashad and Lyoto, which I think will be a very good card too. We've got all big fights -- Randy Couture's gonna fight agian this year. We've got a lot of big cards this year.

Any word on who Couture's going to fight next?
No. Also, Kenny Florian and B.J. is going to be a big fight.

The last thing B.J. wants to be remembered for is that fight.
Yeah. I wouldn't have been shocked if B.J. had won both titles and then retired. That wouldn't have shocked me. But after the way that went down, I can't see him retiring.

There's also talk that the UFC could be adding some fairly well known fighters. You know all the names out there -- Alistair Overeem, Satoshi Ishii, Kid Yamamoto, Gina Carano, Tito Ortiz, Fedor Emelianenko.
Tito Ortiz is in that list of all those great fighters? That's interesting.

What about the other ones?
We're always looking to get the best guys in the world in the UFC, without a doubt. I would be f--ing shocked if Affliction put on another show. They got murdered. I dislike these guys so much that I hope they put on another show because I want them to lose more money. But I don't see it happening, and I can see us getting some guys there.

And of course, any interview with Dana White isn't complete without asking you what's going on with UFC 100.
Oh, man. Holy s**t. I've told everybody, when people asked me before the B.J. fight, 'I can't even think about UFC 100 right now.' Now we've sat down and we've talked about it, and I'm guaranteeing you now, UFC 100 is going to kick f**king ass.

Anybody you can name?
Nope. I've got to get the contracts signed first and then I'll feel comfortable.

Was 2008 the UFC's best year?
Oh, yeah. Definitely. Every year we've taken it up another level.

And you think 2009 is going to keep going in that direction?
I do. I do. I do. And three of our next four fights are on free TV on Spike. My philosophy is we do 12 pay-per-views a year and I like to give free fights back to the fans, and we've got some good ones coming up on Spike.