MMA Has Made Strides, Still Has Long Way to Go in Mainstream Sports Media 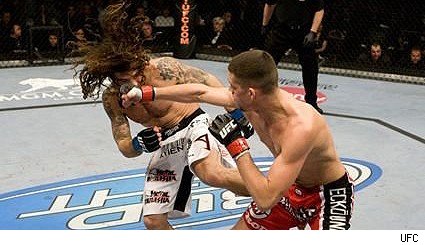 I'm back home after spending a week in Tampa covering the Super Bowl, and that means I was surrounded all week by hundreds of sports journalists representing newspapers, magazines and TV networks. I was there to cover football, but I also spent a little bit of time on the mixed martial arts beat, and I came away realizing how far MMA still has to go before it can really be considered a mainstream sport.

For starters, hardly any of the sports writers I met even knew about UFC 94. The vast majority of them wouldn't be able to pick Georges St. Pierre or B.J. Penn out of a lineup. I'm sure I wasn't the only sports writer in Tampa who watched the fight, but I was one of the few.

When I tried to broach the subject of MMA in conversations with other journalists, about the only positive thing I can say is that I never heard the phrase "human cockfighting." It was clear that the reporters in town to cover the Super Bowl didn't know anything about MMA. I'd get questions like, "Is it scripted like wrestling?" and "What's the difference between ultimate fighting and cage fighting?"

There are certainly some members of the mainstream sports media who get MMA. I had a nice chat with Jim Rome on radio row, and he was excited about UFC 94 and interested in hearing my opinions about it. Dan Wetzel and I talked both at media day and at the stadium on game day, and both times we were talking about MMA, not football. Fox NFL information man Jay Glazer actually left Tampa to see the fight in person in Las Vegas.

But those guys are exceptions. As big as MMA is right now, most people in sports media are barely even aware that it exists. That's a problem, but it also shows how much room MMA has to grow.