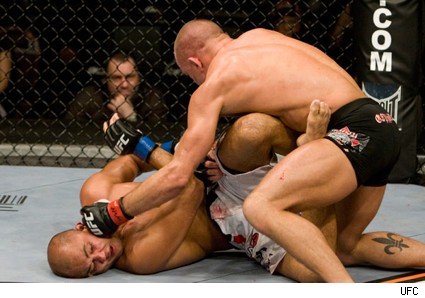 The UFC has spent the last year really hammering home the idea that Anderson Silva is the best pound-for-pound MMA fighter in the world. So it was a little surprising that at the end of the UFC 94 broadcast, the UFC's in-house announcers were referring to Georges St. Pierre as the world's best MMA fighter.

It was also a little surprising that UFC commentator Joe Rogan even mentioned the name of Fedor Emelianenko when he addressed the subject of the top pound-for-pound fighters. So who's really on top? My own list is below.

The last time I assembled a pound-for-pound list, I had St. Pierre fourth, but he now leapfrogs Miguel Torres after his dominant fourth-round TKO win over B.J. Penn. I'm not quite ready to put him ahead of Silva and Fedor, but at this point, I think MMA has four fighters who have separated from the pack in Fedor, Silva, GSP and Torres. You could put them at the top of the list in any order.

So where does B.J. Penn fall? I've moved him down to seventh. I don't think he should fall too far, considering that he lost to a bigger man who was already ahead of him on my pound-for-pound list. But I think he has to fall a little bit after being thoroughly dominated.

Moving into fifth place is Machida, who had his most impressive showing to date in knocking out the previously undefeated Thiago Silva at UFC 94. I don't know if he's going to get a light heavyweight title shot, but I think he's the best light heavyweight in the world.

February is a slow month for MMA, with none of my Top 10 in action. For a month, this list is set.