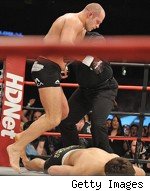 Even though Andrei Arlovski was actually winning the fight for the first three minutes, Fedor's one-punch knockout was so devastating that I think he deserves to be called the best fighter in MMA right now, in any weight class.

I still think it's close between Fedor and Silva, with Miguel Torres not too far behind, and it's even possible that I'll change my mind again next week if either B.J. Penn or Georges St. Pierre does something incredible when they meet at UFC 94. But for now, Fedor is at the top of my pound-for-pound list, which is below.

Did You See That?

The field clears a fence during the New Season Handicap Steeplechase during the at Ludlow Racecourse on September 16, 2008 in Ludlow, England.

Emanuele Canonica of Italy helps his caddie in the rescue of a pigeon from the water around the 18th green during the first round of the Portugal Masters at the Oceanico Victoria Golf Course on October 16, 2008 in Vilamoura, Portugal.

English football fans dressed in armours and tunics play in a friendly match against Belarus fans in Minsk on October 15, 2008 before the start of the Belarus vs. England 2010 FIFA World Cup qualifier of European group 6 match.

Travis Brigley (R) of Hamburg fights with Matt Keith (L) of Ingolstadt during the DEL match between Hamburg Freezers and ERC Ingolstadt at the Color Line Arena on October 14, 2008 in Hamburg, Germany.

Russian Nikolay Davydenko returns a ball to US Robby Ginepri during a second round tennis match at the Masters in Madrid on October 15, 2008.

A golf ball which has been enveloped by the tree over many years is pictured during the pro-am for the Portugal Masters at the Oceanico Victoria Golf Course on October 15, 2008 in Vilamoura, Portugal.

Andy Murray of Great Britain plays football during his training session prior to his thrid round match tomorrow at the Madrid Masters tennis tournament at the Madrid Arena on October 15, 2008 in Madrid, Spain.

Samuel Peter from Nigeria gets a punch from Vitali Klitschko of Ukraine during their WBC heavyweight boxing world championship fight in Berlin, Germany, Saturday, Oct. 11, 2008. Klitschko won the fight after round nine due to technical knock out.

Japan's Kyoko Hamaguchi (lower) fights with China's Hong Yan (red) during the semi-final of the 72kg class of the Women's Wrestling World Championships in Tokyo on October 13, 2008. Hong defeated Hamaguchi and will face Bulgaria's Stanka Zlateva in the final.