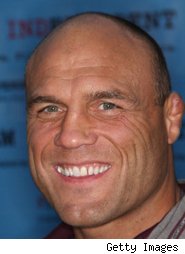 Two weeks after losing his UFC heavyweight title to Brock Lesnar, Randy Couture is looking to his future. And even though Couture is 45 years old, he thinks that future will consist of some big fights, including a rematch with Lesnar and, he hopes, a fight with Fedor Emelianenko.

"A rematch would be fun," Couture said of fighting Lesnar again, in an interview on Inside MMA. "I feel like I have what it takes to win that fight. You hate to see those slip away, but some times that happens. A rematch would be cool, and obviously the Fedor fight, if there's any way that could happen in the future. Maybe that's changed after losing to Lesnar. Who knows?"

A Lesnar rematch is certainly if Couture notches an impressive win in his next fight and Lesnar beats Antonio Rodrigo Nogueira or Frank Mir to unify the UFC heavyweight title. But after watching Lesnar beat up the 45-year-old Couture, it's hard to picture a 46-year-old Couture beating Lesnar.

And it's even harder to picture Couture beating Fedor. As big a fight as Couture vs. Fedor once would have been, we're all better off the sooner we acknowledge that that's just not a fight we're going to see.

I believe that Couture has at least a couple more big UFC fights left in him, and I'd love to see his hand raised in the Octagon one more time. But that's not going to happen with Lesnar or Fedor as an opponent.