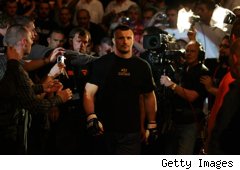 It now appears that the Alistair Overeem vs. Mirko "Cro Cop" Filipovic rematch that we've been talking about forever will not be part of the Dynamite New Year's Eve show in Japan.

But it's disappointing that Cro Cop won't be fighting Overeem. Might he fight the Korean giant Hong Man Choi, who fought Fedor Emelianenko at last year's New Year's Eve show?

Our friends at Free Fight Videos have the news:

In yesterdays press conference for Fields Dynamite FEG executive Sadaharu Tanigawa made if official that Mirko Cro Cop would not be fighting Alistair Overeem.

"Alistair is begging for this fight but this fight will not go ahead on NY eve at Fields Dynamite. We will look to mach them up on a different card."

Mirko Cro Cop is a huge star in Japan and this match-up clearly doesn't interest the Japanese public at moment. I'm sure FEG will match him with a bigger name. As for Overeem a rubber match with Sergei Kharitonov looks likely.

In addition to Overeem-Kharitonov, other MMA fights on the Dynamite card include Joachim Hansen vs. JZ Calvan and Kazushi Sakuraba vs. Kiyoshi Tamura.