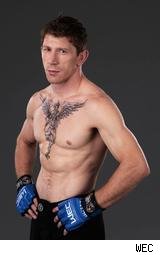 World Extreme Cagefighting featherweight champion Urijah Faber lost a stunning first-round TKO to Mike Brown tonight at WEC 36 in one of the biggest mixed martial arts upset of the year.

Faber, a huge favorite and the most recognizable name in the WEC, came in with a couple of hard strikes in the first round. But Brown leveled him with a right hand, got on top of him on the ground and rained blows down on him until the referee had to stop the fight at 2:23 of the first round.

"I made a small mistake and he capitalized on it," Faber said after the fight. "Congratulations to Mike Brown."

Faber was classy as always in defeat, but his loss has to be considered a major disappointment for the WEC, which had big plans for moving to pay-per-view in 2009. It's hard to see how that can happen now.

Still, the future is bright for the WEC featherweight division. In addition to Brown and Faber, the division has a great wealth of talent including Leonard Garcia, who beat Jens Pulver on tonight's undercard, and Wagnney Fabiano, the Brazilian who just signed with the organization.

Faber, who ranked No. 5 on our most recent list of the top pound for pound MMA fighters in the world, fell to 21-2 in his MMA career. Brown, who was No. 23 in our pound-for-pound rankings, improved his record to 20-4.