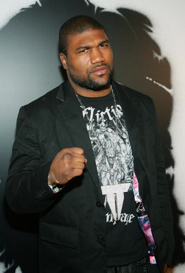 Mark Cuban's HDNet bought the remaining assets of the International Fight League for $650,000.

Says Eddie Alvarez of the demise of EliteXC, "It just sucks. It happens to companies like this a lot. I think if this was the first time I'd been through this, I'd be more shaken. I was with Bodog Fight when they went under about this time last year. I just have to keep my head up, keep training and fight whenever I can. I can't get down."

This weekend's Sengoku card is set.

Will Golden Boy promote a boxing show the same night as Affliction: Day of Reckoning?

Urijah Faber says WEC is heading to pay-per-view in 2009.

Says UFC's Dustin Hazelett, "I'm doing a lot of really unorthodox, wild stuff that could be potentially dangerous. It's kind of how I am outside of the cage too. I'm relaxed in the cage and don't try to waste too much excess energy. But I'm not afraid to try things that others may shy away from. It's how I am in real life."