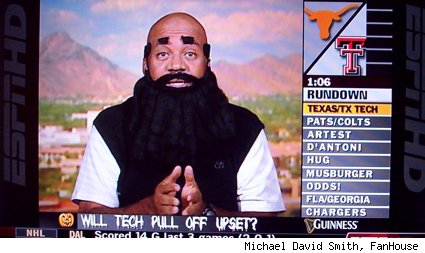 Few members of the sports media have been as critical of mixed martial arts in general and Kimbo Slice in particular as ESPN's Michael Wilbon.

Wilbon said in February that MMA was "savagery," he wondered before Kimbo's last fight why ESPN was covering it so much, he suggested after Kimbo's last fight that it was fixed, and he claimed vindication when EliteXC went out of business.

So it was interesting to see that on today's Pardon the Interruption, Wilbon showed up in his Halloween costume -- dressed as Kimbo Slice. It was kinda funny, and more importantly, it provided Wilbon with one more opportunity to mock Kimbo.

After the jump, see another photo of both Wilbon and Tony Kornheiser, who dressed up today as Michael Phelps. 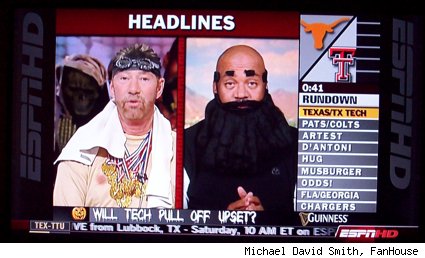 Above: Tony and Mike as Michael and Kimbo.