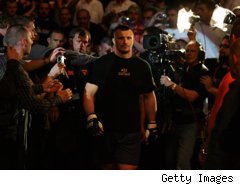 The Croatian fighter Mirko "Cro Cop" Filipovic has reiterated that he plans to have a rematch with Alistair Overeem on New Year's Eve in Japan, but he says that afterward he'll need knee surgery.

Cro Cop's fight with Overeem was one of the most anticipated fights at the September Dream.6 show, but it ended in a no contest when Overeem repeatedly kneed Cro Cop in the groin. Although Cro Cop suffered an injured testicle in the bout, he has apparently recovered sufficiently from that injury to resume training.

In an interview with the Croatian site sport.dnevnik.hr, Cro Cop says he will fight Overeem at the New Year's Eve K1 Dynamite show, and that his knee surgery will take place early in 2009.

After the jump, see the full article, as translated by Robert at www.betwwx.com/ufc-odds/.

Cro Cop goes back to the operating table

Two months before he gets to 'revenge' Overeem, Mirko Cro Cop is once again having injury concerns. His leg remains the problem. He confirmed the new injury in an interview with Nova TV.

"The advice I got from my doctors was that fighting Overeem only two months after my knee operation was a suicide mission. I already had missed the July bout and postponing my September bout was not an option for me. I have only myself to blame."

Mirko has confirmed the New Year's match with Overeem at K1 Dynamite, which will feature five MMA matches and five K1 matches. However he'll have to undergo another knee surgery after his bout.

"I'll prepare for the bout in Zagreb. I'll continue my partnership with Ivan Hippolyte and Vos but I'll only travel to the Netherlands for a week."

When asked about his issues inside the ring:

"The fear of defeat is major motivation for every fight -- not necessarily wounds or physical pain. It can become an issue when you're on a losing streak."