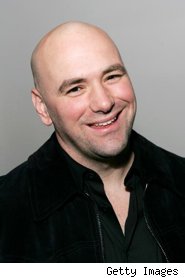 On Season 7 of The Ultimate Fighter, a guy named Jesse Taylor was one of the most talented fighters on the show but was also a drunken jerk, and as a result he got kicked off the show and out of the UFC, even though he had earned a spot in the finale.

On Season 8 of The Ultimate Fighter, a guy named Junie Browning is one of the most talented fighters on the show but is also a drunken jerk. So why didn't UFC President Dana White kick him off the show and out of the UFC?

Steve Cofield and I asked White about that last week, and White said that when he first encountered Browning "He was crying, he was bummed out," but that White thinks Browning can become a more mature person in the UFC, much like Chris Leben has.

"Junie Browning is obviously a kid who comes from a horrible background," White said. "If you look at Chris Leben, Chris Leben had a horrible past, the way he grew up, and you saw the way he acted on Season 1, Chris Leben's a completely different fighter and a different human being today."

Based on the way Browning is acting in the house on the episodes shown so far this season, I wouldn't bet on him having a long and distinguished UFC career. But I wouldn't have bet on Leben either.