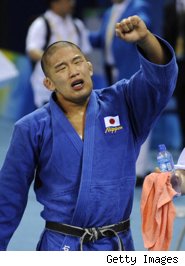 Satoshi Ishii won the Olympic judo heavyweight gold medal in Beijing, and that made him a star in Japan.

But the 21-year-old Ishii is giving up on judo and taking his talents to a new sport: mixed martial arts. The Japanese newspaper Sports Nippon is reporting (via FightOpinion.com) that Ishii will make his MMA debut and appear at the New Year's Eve at K-1 Dynamite event at Saitama Super Arena.

Ishii, a 5-foot-11, 238-pounder, has been talking about switching to MMA since almost the moment the gold medal was put around his neck; he challenged Fedor Emelianenko in August and has been talking about MMA regularly since then. With few opportunities to make a living in Olympic sports like judo, taekwondo and wrestling, MMA is likely to be the professional option for increasing numbers of Olympians.

UPDATE: After the jump, see the translation courtesy of our friend Suki MMA.


Sponichi Annex reported that Satoshi Ishii would show up at Dynamite in NYE and officially announce his participation in DREAM.
He turned down job offers from companies which have strong judo teams on Oct 25. He confidentially contacts DREAM now. One of his teammates thinks that he will let his supporters know about switching to MMA at a party, celebrating his gold medal, in Osaka on Nov 3.
He talks about details of the contract with DREAM after asking for a release from the All Japan Judo Federation next month.
K-1 offered Akebono, a former sumo wrestler, two million Japanese yen for three fights in 2003. DREAM probably offers him more than that.