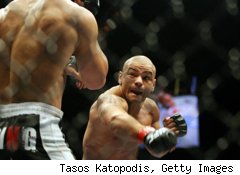 UFC welterweight champion Georges St. Pierre is on his way to Brazil from his home base in Montreal, and he made a stop in Chicago Saturday night to scout a likely future opponent at UFC 90.

St. Pierre writes in his YardBarker blog that he liked what he saw from Thiago Alves, who beat Josh Koscheck to become the No. 1 welterweight contender:

I was very impressed by the performance of Thiago Alves he showed everybody why he belongs in the top fighters in the welterweight division. Of course, it's up to the UFC, but I think he will be one of my next opponents pretty soon.

If he beats B.J. Penn in January, St. Pierre will most likely defend his title against Alves some time in the spring or summer. It's not going to be an easy 2009 for St. Pierre.