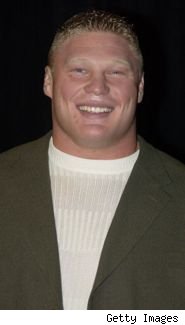 Over the last five days, as much of the mixed martial arts world converged in Chicago for UFC 90, I've asked a couple of dozen fighters, media members and fans who they think is going to win the heavyweight title fight between Brock Lesnar and Randy Couture at UFC 91.

By about a 2:1 margin, most people say Lesnar.

That's what the Vegas odds reflect as well. Although Couture opened as a favorite, enough money has been bet on Lesnar in the couple of months since the fight was announced that Lesnar is now the betting favorite. As strange as it is to say, the heavyweight champ and Hall of Famer is expected to lose to the guy with the 2-1 career record.

In fact, the most common answer I heard when I asked people who they expect to see win was some variation on the seemingly paradoxical, "Lesnar doesn't deserve a title shot, but he'll beat Couture."

I really don't agree with either part of that. The UFC was put in a strange position when its reigning heavyweight champ retired, only to come back at a time when its interim champ already had another fight scheduled. I have no problem with Lesnar getting a title shot under those circumstances.