Patrick Cote 'a Little Pissed' No One Picks Him vs. Anderson Silva; 'I'm Not Dead Yet' 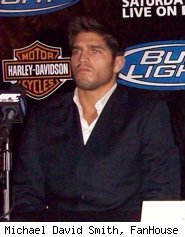 Middleweight champion Anderson Silva is such an overwhelming favorite over Patrick Cote at UFC 90 tonight that the most common question for UFC President Dana White at press events this week has been some version of, "Who will Silva fight after he beats Cote?"

As you can imagine, Cote doesn't appreciate that much.

"I was a little pissed at the lack of respect toward me," Cote said of the way the media talked to him like they assumed he was going to lose. "I'm here. I'm not dead yet. I'm going to put on a good show and I'll surprise a lot of people, and after that maybe a lot of people will regret what they said."

White says he gets it all the time: There's an assumption among UFC fans that Silva simply can't lose.

"Our 185-pound division is stacked with great fighters," White said. "He makes it look like it's not. That's how good he is. Everybody thinks that every Anderson Silva fight is going to be a walk-through. ... "Anderson has this Mike Tyson mystique. It's becoming, 'Who's Anderson going to fight? He's going to knock him out.'"

Of course, Mike Tyson's mystique only lasted until he met Buster Douglas. And Cote thinks he has the chance to end the Silva mystique as well.

"To fight for the UFC title is a dream come true for me," Cote said. "I trained very hard for this fight. It's a real dream for me to fight Anderson Silva, the best fighter in the world. I have great respect for this guy and I'm going to give him a real war."