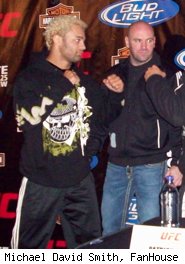 In promoting tonight's Josh Koscheck-Thiago Alves fight at UFC 90, Dana White made an interesting statement, calling Koscheck "the best wrestler in the UFC."

First, is it true? I'm not sure. Koscheck was a great college wrestler, but is he better as a pure wrestler than Randy Couture, Rashad Evans, Matt Hamill, Dan Henderson, Matt Hughes, Brock Lesnar, Chuck Liddell, Gray Maynard or Georges St. Pierre, to name a few? I don't know.

Second, is his great wrestling part of the reason Koscheck is so unpopular with the fans that he was the one guy who was booed more than Sean Sherk at the UFC 90 weigh-ins? I think it is. A lot of fans disdain Koscheck because they come out to watch an MMA fight and he turns it into a wrestling match.

But I also think Koscheck deserves credit for taking the Alves fight on short notice, and I think he's improving as an all-around MMA fighter. I hope the time comes when UFC fans see "the best wrestler in the UFC" as someone they can cheer.