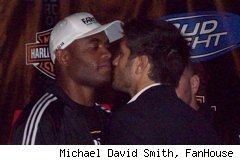 UFC middleweight champion Anderson Silva is the main attraction on Saturday night at UFC 90, where he'll defend his title against Patrick Cote. But the show should be a solid one from start to finish. Here are the details:

Who: In addition to the main event, the fights on the main card are Thiago Alves vs. Josh Koscheck, Tyson Griffin vs. Sean Sherk, Fabricio Werdum vs. Junior "Cigano" dos Sanots and Rich Clementi vs. Gray Maynard.

Anderson Silva vs. Patrick Cote
I've been looking all week for a reason to pick the upset. Cote looks like he's in great shape, yes. He says he's been working hard on his ground game and is becoming a more well-rounded fighter, yes. It's possible that Silva is overlooking him, yes. But come on: Silva is the best fighter in the world, and Cote just isn't in his class.
Predicted winner: Silva

Josh Koscheck vs. Thiago Alves
When Diego Sanchez pulled out of his scheduled fight with Alves, Koscheck stepped in on short notice and gave the fans what I believe will be a better fight. Koscheck is an incredible wrestler, but I think Alves will show strong striking and good takedown defense. In my opinion Alves is the second-best welterweight in the world right now, behind only champion Georges St. Pierre. I think Alves will get one step closer to a title shot.
Predicted winner: Alves

Tyson Griffin vs. Sean Sherk
Sherk has had a long, hard fall from grace. The former lightweight champion, he was stripped of his title when he failed a steroid test, and then beaten up by B.J. Penn in his first fight after the steroid suspension. He says he's in as good of shape as ever, but after talking to Griffin I was impressed with what great shape he's in, and I think he's going to put Sherk on a two-fight losing streak.
Predicted winner: Griffin

Fabricio Werdum vs. Junior "Cigano" dos Santos
Werdum is worthy of a heavyweight title shot, but the problem is that he just doesn't fit into the picture right now because he's not part of the Randy Couture-Brock Lesnar/Frank Mir-Antonio Rodrigo Nogueira tournament. However, all he has to do is keep winning and eventually he'll get that shot. He should keep winning against Cigano, a fellow Brazilian who looks impressive but has never fought anyone of Werdum's quality.
Predicted winner: Werdum