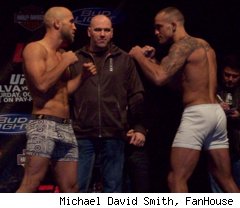 Welterweight Josh Burkman came in overweight today at the UFC 90 weigh-in, showing up at 173 pounds for his fight with Pete Sell.

By rule, Burkman will get an hour to try to lose two pounds and get down to the 171-pound limit. If he's not able to make weight, it's not known yet whether the fight will go on, but it most likely will. (UPDATE: Burkman got down to 171 on his second attempt, an hour later.)

All other fighters made weight, including Thiago Alves, who was the subject of much speculation after coming in three pounds overweight for his last fight, against Matt Hughes at UFC 85.

Both fighters in the main event made weight with room to spare: UFC middleweight champion Anderson Silva came in at 184, while challenger Patrick Cote came in at 183.

* Burkman initially weighed in at 173; he made 171 on his second attempt an hour later.