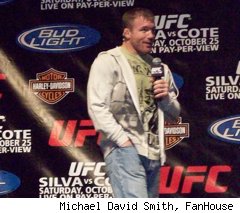 There's a feeling among some mixed martial arts fans that the UFC doesn't pay its fighters enough, and that when Randy Couture left the UFC in a contract dispute, he was fighting a good fight against unfair labor practices.

Count Matt Hughes as one fighter who thinks contracts in the UFC are perfectly fair.

At a Q&A session with fans in Chicago today before the UFC 90 weigh-in, Hughes said that if Couture didn't like the terms of the UFC contract, the time to say so was before he agreed to it.

Hughes added that once you've established yourself as a high-quality fighter, the UFC will reward you: "The only guys complaining about money are the kids with six to 10 fights who haven't fought a lot."

Of course, Couture was complaining about money, too -- at least until this summer, when he gave up his yearlong quest to get out of his UFC deal and agreed to come back and fight again, starting with Brock Lesnar at UFC 91. Hughes seems to think Couture was foolish ever to leave.

And Hughes also thinks Couture is going to lose in his first fight back. Asked about the Couture-Lesnar fight, Hughes said that he respects Couture as a fighter and would never bet against him, but if he has to pick, he picks Lesnar.