Josh Koscheck: I Respect Anyone Who Steps Into the Cage, Even Diego Sanchez 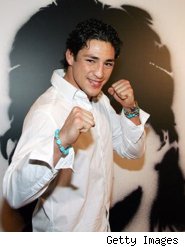 Josh Koscheck has had a long history with Diego Sanchez.

On the first season of The Ultimate Fighter, the two didn't much like each other as housemates, and Sanchez ultimately eliminated Koscheck in the semifinals. Koscheck got his revenge at UFC 69, beating Sanchez a day after Sanchez shoved him at the weigh-in. And tomorrow Koscheck will fight Thiago Alves at UFC 90 as a fill-in for Sanchez, who pulled out with an injury.

But while there may have been bad blood in the past, Koscheck would like it to be known that he has nothing against Sanchez.

"I've got a lot of respect for anyone who steps into the cage," Koscheck said. "Even Diego Sanchez."

And, for the record, although Koscheck is often seen as something of a villain in the UFC, Alves says he likes him.

"I think he's a cool guy," Alves said of Koscheck. "I've got nothing against him. He's a great fighter and a great guy."

It must be said that through three days of events related to UFC 90, I've heard no trash talk, no disrespect, nothing except the fighters exchanging pleasantries. These guys will pummel each other in the Octagon on Saturday night, but they seem to have genuinely warm feelings toward each other.