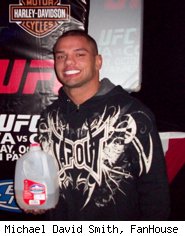 Thiago Alves came in four pounds overweight for his last fight, a win over Matt Hughes at UFC 85, and since then I've taken every opportunity to ask him about his weight.

Today I stopped Alves at the UFC 90 press conference and asked him about the gallon jug of water he was carrying around with him. He told me he'll drink two gallons of water before the day is over, and that hydrating himself like that today will make it easier for him to dehydrate himself before the weigh-in on Friday afternoon, when he has to weigh 171 pounds for his fight with Josh Koscheck.

Alves said he's taking his training seriously and he's very serious about making weight, and he shouldn't have to get naked on the scale like Gina Carano. We'll see on Friday.