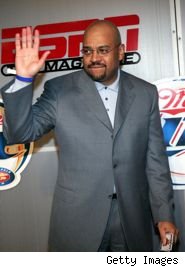 After Kimbo Slice was knocked out by Seth Petruzelli in what turned out to be the final mixed martial arts fight in the history of the EliteXC promotion, ESPN's Michael Wilbon had harsh words for EliteXC and Kimbo on Pardon the Interruption, saying, among other things, that the fight was fixed.

So when the news came out that EliteXC is out of business, it was obvious that Wilbon would have something to say about it. On today's Pardon the Interruption, he did.

After Wilbon's on-air partner, Tony Kornheiser, noted EliteXC's demise, Wilbon said, "Where are all the rabid sycophants who went wild with their e-mails when I said this thing last week is a fraud? Where are they? It's a fraud! Go home! Get out!"

Wilbon clearly feels that he has been vindicated. And if he had limited his condemnation solely to EliteXC and Kimbo, he'd be justified in his sense of vindication.

But Wilbon seems to conflate the sport of MMA with EliteXC, and that's just silly -- it's like conflating the sport of football with the XFL.

UFC 90 is in Wilbon's hometown of Chicago on Saturday, and I'd urge Wilbon to make a visit home this weekend and get a press pass. If he still dislikes MMA after watching Anderson Silva, the best fighter in the world, fine. But I sense that Wilbon has no interest in learning anything about the sport, and would rather continue to trash MMA from a position of ignorance.