If Fabricio Werdum Wins at UFC 90, He Deserves a Title Shot -- but Won't Get One 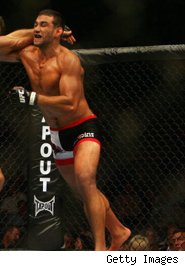 The UFC heavyweight division is completely focused right now on the four-man tournament pitting Brock Lesnar against Randy Couture in November, Frank Mir against Antonio Rodrigo Nogueira in December, and the winners against each other next year.

And because of that focus on the heavyweight tournament, the UFC's best heavyweight outside those four, Fabricio Werdum, is practically an afterthought as he prepares to fight on the undercard at UFC 90 on Saturday. And Werdum himself sounds like he wishes he could fight a better opponent than Junior "Cigano" dos Santos. Werdum tells Sherdog:

"That's why I want to have a good fight now against 'Cigano,' to show I am ready for the belt. They will analyze this fight and judge if I deserve this opportunity or not. So I want to fight well now to deserve the belt. ...

"This is my last fight under my old contract, which had four fights. I have already closed a new contract with the UFC, which has four fights too. This fight for me will be an obligation, nothing else, but I have to do my role."

The truth is that Werdum has done enough in the Octagon that if he beats Cigano, he's worthy of a heavyweight title shot. But realistically, he's not going to get one without at least one more win. The Lesnar-Couture and Nogueira-Mir winners won't meet until the spring or summer of 2009, and the winner of the four-man tournament won't be ready to fight again until the fall or winter of 2009.

Unless Werdum wants to sit out for a year or more before he gets the first fight of that new four-fight deal, he's going to have to fight again before he gets that title shot. But as long as he keeps winning, he deserves to be the first challenger to the winner of the heavyweight tournament.