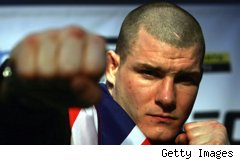 The UFC's efforts to expand abroad continue this weekend with the organization's seventh event in England, UFC 89. This time a Brit, Michael Bisping, is fighting in the main event, taking on Chris Leben in a fight that wouldn't be a main event in the U.S., but should still provide some fireworks.

Who: In addition to the main event, the fights on the main card are Keith Jardine vs. Brandon Vera, Rameau Thierry Sokoudjou vs. Luis Cane, Marcus Davis vs. Paul Kelly and Chris Lytle vs. Paul Taylor.

How: There's no way to watch live in North America; it's only available on tape delay on Spike, starting at 9 p.m. Eastern. In the UK you can watch live on Setanta Sports.

Michael Bisping vs. Chris Leben
If I were Leben, I'd want to finish this fight to make sure the judges don't give Bisping some home cooking. But I don't think he's going to be able to. Bisping has been very impressive recently, winning both of his fights this year by first-round TKO, and I think he'll win another by TKO on Saturday.
Predicted winner: Bisping

Keith Jardine vs. Brandon Vera
Jardine is one of the hardest fighters to figure out in the UFC. In his last six fights he has three extremely impressive wins, beating Chuck Liddell, Forrest Griffin and Wilson Gouveia. He also has three very bad losses, looking lackluster in losing a decision to Stephan Bonnar and then getting destroyed by Houston Alexander and Wanderlei Silva. Of course, you can say the same for Vera: He announced his presence in a big way by beating Frank Mir with a first-round TKO at UFC 65, and since then he's gotten pummeled twice and won one of the most boring decisions you'll ever see. Which Jardine will we see Saturday? And Which Vera? I like Jardine to show a little more explosiveness.
Predicted winner: Jardine

Rameau Thierry Sokoudjou vs. Luis Cane
Cane is a good fighter whose only loss came by disqualification when he kneed James Irvin in the face on the ground, but he's never fought anyone with Sokoudjou's power, and I'm not convinced that he has the chin for it.
Predicted winner: Sokoudjou

Marcus Davis vs. Paul Kelly
Davis, known as the Irish Hand Grenade, has good power in his hands and will be looking to turn things around after a disappointing showing in his last fight, a loss to Mike Swick at UFC 85. I like him to finish this fight early.
Predicted winner: Davis

Chris Lytle vs. Paul Taylor
Lytle has lost four of his last seven fights, but all of those losses have come to Top 10 welterweights (Josh Koscheck, Thiago Alves, Matt Hughes and Matt Serra), and he went the distance in three of the four, with a doctor stoppage because of a cut against Alves the only time he didn't last three rounds. I like him to beat Taylor by decision.
Predicted winner: Lytle