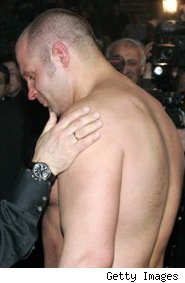 The report last week that Fedor Emelianenko would fight Andrei Arlovski in an Affliction show on January 24 was apparently premature, as so many reports focusing on Fedor's future have been.

It now appears that Fedor could fight either Arlovski or Josh Barnett next, and that Affliction hasn't settled on a date for its next show, which will be co-promoted by Golden Boy Promotions. Affliction boss Tom Atencio told Five Ounces of Pain that all the talk about Fedor's plans has been premature.

Also premature is talk about the undercard of Affliction's next show. Rumors that Gegard Mousasi will fight Vitor Belfort and Matt Lindland will fight Renato "Babalu" Sobral are also premature. Atencio says:

"There are a lot of rumors," Atencio acknowledged. "I did sponsor Mousasi for his event (in Japan). As you probably saw, he was wearing Affliction. We have a relationship and if he comes and fights for us, absolutely, he'd be a great asset to the company. But everything is a rumor until I finalize it. Until you hear it from me, it's a rumor and it's as easy as that."

So, basically, there's no reason for MMA fans to get excited about Affliction right now because there are exactly zero fights scheduled. Some day maybe there will be, but until that point, we're wasting our time talking about it. As time wasters go, though, speculating about what might happen next with Fedor sure is fun.