Patrick Cote: Anderson Silva Has Holes in His Game That I Can Exploit at UFC 90 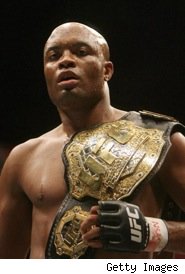 I've always thought of fighting Anderson Silva as this incredibly difficult puzzle to solve: Stand up with Anderson Silva? Bloodbath. Go for a takedown? He says, "Hello? I'm a black belt in Brazilian jiu jitsu. Thank you for taking this fight to the ground."

But no matter how complete a fighter Silva is, his opponent at UFC 90, Patrick Cote, insists that he does, in fact, have a game plan for fighting him.

"We've found some holes in his game and we're going to exploit that for sure," Cote said today on a call to promote UFC 90. "We're going to have a good strategy, a good game plan in this fight."

Cote didn't reveal anything more specific about that strategy than, "The plan is to win. The plan is to put him away and take his belt." And I have to say, I'm skeptical that a game plan exists for Cote to beat Silva. Sure, it's possible that the right strike will land in the right place and the right time, but Silva is just so much better than Cote (and every other middleweight) that I see beating him as something more likely to happen because of something sudden and spontaneous, and not because of a perfectly executed game plan.

Still, Cote's attitude heading into the fight is the only attitude a fighter can have.

"I'm training like crazy and I'm ready to go," Cote said. "I'm ready for 25 minutes with anybody."